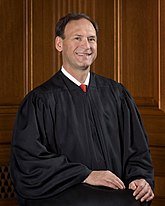 Samuel Alito (1950–) is a conservative Supreme Court Justice appointed by former President George W. Bush to replace Sandra Day O'Connor after she retired in 2005. His appointment pushed the Court well to the right. His nomination was quite controversial, and many liberals believed he would not be an impartial Justice; they were right.

His wife seemed to be crying during his confirmation while he was being questioned by Democratic Senators; a cheap way to try to milk sympathy for him. He is one of six Roman Catholics on the Supreme Court as of September 2012, and the second Italian American on the Court. His father was an Italian immigrant.

As of 2022 Alito is considered to be part of the most conservative faction of court along with Clarence Thomas, even going so far as to sign on to Thomas' dissent that supported the anti-vaxxer movement.[2]

See the main article on this topic: Misogyny

While many Republicans wish for the good old days of 1950, or sometimes even 1850. Alito's leaked draft ruling[3] on overturning Roe v. Wade in May 2022 showed that he yearns for the days of 1650, or perhaps 1250. In his leaked draft, Alito refers to English judge Matthew Hale (1609–1676) as a "great" and "eminent" common law legal authority;[3]:16,26[4] Hale is cited nine times in the draft.[3]:16-19,26,44 Hale sentenced two 'witches' to death.[4] Hale was largely responsible for the longstanding legal distrust of women's accusations of rape, as well as the marital rape exemption from prosecution.[4] Two problems in Alito's use of Hale in the draft are:[4]

Alito also cites judge Henry de Bracton (c. 1210–1288) six times with his book De Legibus et Consuetudinibus Angliae.[3]:16,17,25,26,44 Bracton describes the 'proper' procedure for determining whether a woman is pregnant: "carefully examine her by feeling her breasts and abdomen and in every way", and if the exam was inconclusive she would be locked in a castle at her own expense and examined every day until conclusion.[5] Bracton also states that in cases of suspected fraud, "the woman cannot exceed the gestation period by a single day, even where the issue dies in utero or turns into a monster."[5] Although democracies did not exist at the time of Bracton, he did emphasize the point that England was a theocracy in his book by stating that the king was the "vicar of God" with no equal.[5]

Despite deserving a lot of criticism, there are also some occasions in which Alito should be praised. For example, he was the sole member of the Supreme Court to dissent in Snyder v. Phelps,

where he ruled that the Westboro Baptist Church had entrapped the participants of a funeral despite their speech, in its self, not being unconstitutional. This opinion earned the praise of John Paul Stevens,

who had then only recently retired from the Supreme Court. He was also the sole dissenter in United States v. Stevens,

ruling that the state has an obligation to protect animals, like children, since they are vulnerable and, therefore, images of animal abuse (the law in question was intended to ban crush films

, and Congress was later able to get a variant that passed constitutional muster through) do not constitute speech.

This law-related article is a stub.
You can help RationalWiki by expanding it.
Retrieved from "https://rationalwiki.org/w/index.php?title=Samuel_Alito&oldid=2473712"
Categories:
Hidden categories: