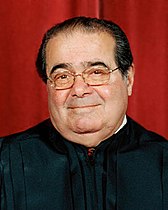 Associate Justice Antonin Scalia (1936—2016) was one of six Roman Catholics, the sole Sicilian-American on the United States Supreme Court, and, in the world of constitutional law, "nothing this bad" and "embarrassing."[2] He was appointed to the Supreme Court by Ronald Wilson Reagan in 1986.

An early supporter of the Federalist Society, Scalia was thus a charter member of the neoconservative movement. He grew up solidly middle class as the son of a language professor and a public school teacher. His death set in motion a chain of events which did permanent damage to the public image of the Supreme Court.

Scalia considered himself a textualist and a Constitutional originalist, a rather meaningless term. "Textualism" means he interpreted laws by their plain meaning. For example, if there was a law on sex crimes and it mentions "forcible rope," he would've viewed this obvious typo as referring to tying people up, not nonconsensual sex.[4] His originalist view was that he, and only he, knows exactly what James Madison meant (though Scalia was proven to not know what Antonin Scalia meant[2]). In many instances it is fairly cut-and-dried, such as his support for the constitutionality of the death penalty (even on minors

) on the grounds that the Framers would never have thought of it as cruel and unusual. However, given that they all died around 150-200 years before the invention of the Internet, it is unknown exactly how he is able to discern their opinions on matters such as internet security. He was praised for his defense of the Fourth Amendment but he believed that it only protected property and not people from the police, thus, he would usually give unrestricted power to the police and, at times, overturn decades of precedent.[5] He believed that the Fourteenth Amendment only applies to… recounts in Florida, that axes shouldn't be carried in public but rocket launchers might be permissible,[6] and the Eighth Amendment prevented forcing him to read a 2700-page health care bill, but not torture.

Scalia's intense Roman Catholicism was reflected in an apparent belief that the state's authority is derived from a deity rather than the consent of the governed, as stated in the Preamble of the Declaration of Independence.[7]

He was a cultural warrior willing to abandon his supposed originalism so long as it served his ideological agenda.[8]

Oddly enough, Scalia was also the only prominent conservative in U.S. politics of his era with a sense of humor: at the White House Press Club party entertained by Stephen Colbert (who was sweating bullets to power), Scalia was not only the only audience member laughing, but he joined in the fun with some "ethnic sign language" directed back at the podium.

He was even a hunting buddy of fellow Supreme Court Justice and Obama nominee Elena Kagan.[9]

In his dissent in PGA Tour, Inc. v. Casey Martin, Scalia wrote, "It has been rendered the solemn duty of the Supreme Court of the United States, laid upon it by Congress in pursuance of the Federal Government's power '[t]o regulate Commerce with foreign Nations, and among the several States,' to decide, What Is Golf."[10]

Apparently, Scalia described the Equal Protection Clause argument (which he used in Bush v. Gore to essentially justify handing Dubya the White House on a silver platter) in the following terms: it was, "as we say in Brooklyn, a piece of shit".[11]

Scalia once called The Voting Rights Act "an act of racial entitlement" and seized on the opportunity to reduce the "entitlement" in the Supreme Court Case Shelby Counter vs Holder.

On February 13, 2016, Scalia died in his sleep on a visit to Texas. This is only the second time that a SCOTUS justice has died in office since 1955. After months of the Republicans denying Obama an appointment in his last months in office, he was replaced by Neil Gorsuch.

Unsurprisingly, right-wing conspiracy theorists immediately claimed that it was a hit by the Luciferian[17] Obama administration,[18] even though Scalia was an overweight 79-year-old chain smoker with heart problems, high blood pressure[citation needed] and a very stressful job.

Shortly after Scalia's death, George Mason University's law school renamed itself as the Antonin Scalia School of Law (ASSoL). This acronym proved problematic and the school quickly renamed itself again, as the Antonin Scalia Law School at George Mason University. This did not stop students from referring to it as "ASSLaw."The late Scalia, whose sense of humor is well-known, would likely have been amused by the incident.[19]