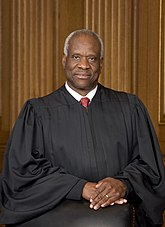 Clarence Thomas (1948–) is a radical wingnut and member of the Supreme Court. He is also the second African American to be elevated to the Supreme Court and the only African American currently so honored (he succeeded the first, Thurgood Marshall.) In his early years, he was seen as little more than an echo of Antonin Scalia (as of 2014, Scalia and Thomas voted together 91% of the time[3]), the most conservative member of the court. However, in recent years Thomas has become more vocal and started staking out positions — often further to the right than even Scalia.[4]

With regard to the Constitution, Thomas regards himself as a strict adherent to originalism, that the Constitution should not be interpreted through the lens of modern times, but through the Constitution as it was in 1789. This is despite, as Thomas acknowledged, the fact that the Founding Fathers were racists and slaveholders.[5]:7-8 Thomas' record shows, however, that his originalism is episodic and hardly strict.[5]:151-152

Justice Thomas hasn't been big on giving the world glimpses into his thought processes. With alarming consistency, he cosigned whatever Nino said, with no further comment. Like a solar eclipse or the bloom of a corpse flower, the release of an actual opinion from Justice Thomas is a rare event noteworthy for that fact alone. Perhaps we should all be grateful the man does not attempt self-expression on a more regular basis. (Gay marriage is worse than slavery![6]) 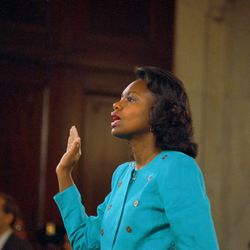 George H.W. Bush could've nominated Chris Rock to the SCOTUS and gotten him on the bench. Bush was still high on his post-Gulf War victory and approval ratings. Unfortunately, Thomas was less qualified than Chris Rock to be nominated for the court.[7] It's almost as if it was a purely-political appointment designed to help wage the GOP's culture wars without any regard to the court's proper function or purpose.

During his confirmation hearings, Anita Hill

(a former clerk of his) stepped forward and claimed to have been sexually harassed by Thomas. Conservatives blasted her, even calling her "a little bit slutty and a little bit nutty."[8] Many liberals rallied to her defense, especially women's groups. In the end, despite a Democratic majority in the Senate, Thomas was approved for the Supreme Court. Many said that Ted Kennedy, a high ranking member of the Judiciary Committee who played a key role in spiking the nomination of the similarly extreme conservative judge Robert Bork just a few years earlier, was personally unable to do anything about Thomas due to his own marital issues in that era.

On February 22, 2006, he spoke from the bench. He didn't say a word from there to any lawyer until 2013 when he responded to Justice Scalia's comment about a lawyer attending Yale Law school. Thomas said, "Well, he did not." Although some say he purposely said that,[9] others think he was really making a side joke to Antonin Scalia.[10] Whatever it is, Clarence has not asked a question from the bench in court. For over 10 years he has done nothing but stare at the ceiling.[11] Thomas' written record is quite voluminous, so one can find out what he thinks (and it's quite ugly).[5]:1-16 It may be that he just chooses not to ask questions because he doesn't want to know the answers as his mind is already made up. It is a nice ceiling. So, in fifty years, when your grandchildren ask you, "Did Clarence Thomas do a good job?" you can answer "Well, he did not."

Thomas is perhaps the most corrupt Supreme Court justice in recent memory. He has spent 20 years filing false financial statements — a crime that he will likely never be convicted of due to his position of power and the political gridlock in Congress.[12] Furthermore, he did not recuse himself from the Citizens United case despite Citizens United having spent $100,000 on his behalf to support his nomination to the court.[13]

In 2012, some Republicans, not thrilled with the crop of candidates, began suggesting that should the nomination come down to a brokered convention, Thomas would be a possible choice for president.[14] In retrospect, they could have done worse.

Thomas was one of five current (2013) Supreme Court Justices to officiate at a wedding; his gig being the marriage of Rush Limbaugh and "aerobics instructor" Marta Maranda Fitzgerald on May 27, 1994. The wedding was held in Thomas' home in Virginia. The couple later (2004) divorced.[15] Thomas also attended Limbaugh's next wedding, to Kathryn Rogers in June 2010, but he was not working that one, just partying.[16]

Not originalist
See the main article on this topic: Stopped clock

On June 18, 2015, Thomas joined his Supreme Court liberal colleagues in ruling in favor of Texas rejecting license plate designs that feature the Confederate flag. A Texas board found "a significant portion of the public associate the Confederate flag with organizations advocating expressions of hate directed toward people or groups".[17][18]

Thomas has also argued that the federal government cannot ban medical marijuana, although he believes this for reasons of state's rights, and not because he personally favors the policy.[19]

Corey Robin, in his book The Enigma of Clarence Thomas, argued that Thomas's ultra-conservatism is fundamentally rooted in black nationalist ideas, specifically a belief that racism is too deep-rooted in the white American psyche to even try to correct, leading him to conclude that black people should be establishing self-reliance separate from white America and that measures supporting racial integration ultimately amount to "white paternalism" that leave black people worse off.[20][5] Thomas' black nationalism is one that is misogynist, that sees the role of the black woman as subservient to the black man.[5]:28,150[21]

Thomas' views of the Constitution are rooted in a tension between what Robin calls the "White Constitution" (the original Constitution of 1787 plus the Bill of Rights of 1789) and the "Black Constitution" (the Constitution through the three Reconstruction amendments, through Fifteenth Amendment of 1870).[5]:168 This tension supports Thomas' idealized view of his grandfather's time, Myers Anderson (1907–1983),[22] who raised him as his son,[23] though Anderson spent most of his life (and most of Thomas' formative years) in the Jim Crow South where the Reconstruction amendments had been effectively nullified. Thomas' dystopian view of African American life is that all that is needed to protect the African American family is the First (particularly commercial speech) and Second Amendments (gun ownership)[5]:129-131,182 and the Equal Protection Clause of the Fourteenth Amendment. Nonetheless, these protections did nothing to protect African Americans from the 1921 Tulsa race massacre that wiped out an entire African American business district,[24] or from the long and ugly history of lynchings.[25] Thomas has written in SCOTUS judgments that the Eighth Amendment ("no cruel or unusual punishment") does not apply to states, that the Eighth Amendment only applies to penalties (time served), not to how prisoners are treated after they are incarcerated.[5]:197-198 Given the high rates of African American imprisonment,[26] it is effectively a States' rights-type argument that enables white supremacy.[5]:215-218 In Thomas' worldview, the harsh punishment and policing that he supports helps to protect African American neighborhoods from crime,[5]:209 it is a sort of imminentizing of dystopia.

Thomas was among the first group of African Americans to integrate the College of the Holy Cross in 1968. Thomas and his classmates formed the Black Student Union.[5]:13,26-27 One the points in their manifesto was:[5]:26-27

Thomas was known to be particularly strident about anti-miscegenation, even to the point of verbally harassing interracial couples on campus.[5]:27 Thomas was, in fact, opposed to interracial marriage up until he met his (white) second wife-to-be, Ginni Thomas.

This might not be so remarkable by itself — over time, people fall in love, change their minds, become less strident, etc. However, Thomas has overall maintained his masculinist black nationalist worldview while his wife has increasingly become involved in far-right politics, including associating with white nationalists (NumbersUSA

), spreading a deep state-type conspiracy,[27] and paying for bus transportation to the rally preceding the almost all-white 2021 U.S. Capitol riot.[28]

Clarence has referred to his marriage to Ginni as extremely close politically,[29] stating in 2011:[30]

This raises the corruption issue again because Ginni Thomas is now being investigated for her involvement in trying to overturn the 2020 U.S. presidential election by trying to influence then-White House Chief of Staff Mark Meadows and indicating QAnon ideology[31] and using schizofascism.[32] Clarence Thomas already refused to recuse himself on a January 6 insurrection case before the Supreme Court (in which he was the sole dissenter), and it seems unlikely that he would do so should a case directly involving his wife come before the court.[33]