From RationalWiki
Jump to: navigation, search
Kim might refer to: 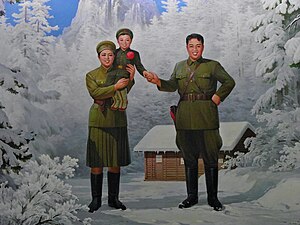 Nearly all references to the surname Kim (pertaining to RationalWiki's mission) will refer to the crazies that have ruled North Korea from 1948 and onward. They are known as the Kim family or the second "Kim dynasty." In North Korea, the family is officially referred to as the "Mount Paektu Bloodline" (sometimes spelled "Baektu"). The mountain is traditionally sacred to Koreans (North and South) and neighboring Manchus; the Kim family appropriated its name for propaganda purposes.

Kim is also the most common family name on the Korean Peninsula, a common first name outside of Korea (Kim Davis, Kim Suozzi), an edible seaweed (e.g. served in Recipe:Kimchi jiggae), and an ethnic group in Chad.