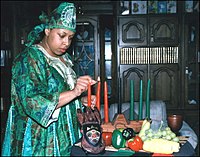 A woman lights a candle in a Kwanzaa kinara.

Kwanzaa is a week-long festival that honors African American heritage and culture. It runs from December 26 to January 1 of the following year.

It was invented by a social activist named Maulana Karenga (who was born Ron Everett, but changed his name to something more "Africanesque" later on) in 1966. It was purposely put around the time of Christmas so people would remember the holiday. The new traditions were given Swahili names, because Swahili is a relatively easy African language to access. However, Swahili is an East African language while most African-Americans are descended from people taken from West Africa. Celebrants use a menorah-like object called a kinara to hold ceremonial candles as part of the ritual surrounding the holiday.

There are seven principles of Kwanzaa, each with a Swahili name:

While many [Who?] have claimed that Kwanzaa, as a made-up holiday, has no significance and should not be observed, it must be remembered that all holidays are made up. An amusing example is Ann Coulter, who on the one hand believes Kwanzaa was created by an African-American FBI stooge[1] and thus should be ignored, and on the other hand gets really upset when people point out good ole' Saint Nicholas wasn't very white at all[2], preferring the modern made-up version.

This culture-related article is a stub.
You can help RationalWiki by expanding it.
Retrieved from "https://rationalwiki.org/w/index.php?title=Kwanzaa&oldid=2406115"
Categories:
Hidden categories: