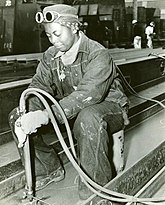 . [7] In the 1940s, these influences morphed into the genre known as rhythm and blues

, which paved the way for rock and roll

(a hybrid of R&B and country music

, which built on the traditions of R&B, but exchanged the typical backbeat rhythm in favor of a rhythm driven by a strong downbeat. [10] The 1970s also were the beginnings of the music genre of hip-hop

over the breaks.[11] In the 1980s, African American artists, blending the above traditions with European synthesizer music, laid down the foundation for electronic dance music

in the form of house music

Barack Obama, the 44th President of the United States, is African American through his Kenyan father and still has close relatives in Africa. Contrary to popular belief, he is descended from slaves... through his white mother[15]. Unlike the majority of African Americans, he is of mainly east African descent.

There is speculation that other presidents, notably Lincoln and Jefferson, were of African American lineage.[16]

In 2015, Men's Health News reached multiple levels of absurdity when it speculated that actor Idris Elba, who is a British citizen of Sierra Leonean and Ghanaian descent, might become the first "African-American" James Bond, apparently forgetting that African Americans are, by definition, U.S. citizens.[17] Yes, that James Bond: the hero of Her Majesty's Secret Service who guest-starred with Queen Elizabeth II in the opening ceremony of the 2012 London Olympics and took orders from Dame Judi Dench. Whether Elba gets the role or not, an American of any ethnicity working as MI-6's most trusted 00 agent would be a first indeed.