From RationalWiki
(Redirected from FBI)
Jump to navigation Jump to search 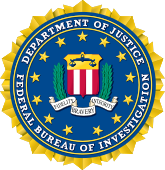 The truth is out there.

The United States Federal Bureau of Investigation is a law enforcement agency that functions as a federal police, counterintelligence and domestic intelligence agency within the United States. FBI is a division of the Justice Department. FBI agents are armed federal officers with police powers.

FBI has the following mission:

"To protect and defend the United States against terrorist and foreign intelligence threats, to uphold and enforce the criminal laws of the United States, and to provide leadership and criminal justice services to federal, state, municipal, and international agencies and partners."[1]

Moreover, the FBI has immediate jurisdiction over all bank robberies, which they take seriously, except in LA. There are too many in LA for the FBI to keep up, so they keep out.

The bureau traces its roots to the mid-19th century, but it was more or less an obscure agency trying to enforce the Interstate Commerce Act. Then, in the 1920s the US government experimented with alcohol prohibition. Naturally this caused the crime rate to soar and the government needed a more effective policing organization. During the prohibition era, a young bureaucrat named J. Edgar Hoover found that he could build a career in law enforcement, and began running the FBI as his own private fiefdom. He took the reins in the 1920s and only left the agency when he died, in the 1970s. In the 1930s, heavily armed bank-robbing outlaws, such as Bonnie and Clyde or John Dillinger, became a serious problem in the country, and the FBI became famous for its attempts at suppressing the crime wave. The outlaws also became famous for outwitting the feds, until their bodies started turning up with incredible levels of lead poisoning. During World War II the Bureau had a few successes stopping potential German spies and saboteurs. Hoover gained a lot of power during the war years, something which was very addictive, and in the 1950s the Bureau turned to the next major threat: civil rights marchers communists. They had a few successes in the 1960s arresting white supremacists who were killing black people with impunity in the South, and many more successes killing Black people, Native Americans and Chicanos with impunity themselves,[citation needed] but they also kept an eye on anti-war activists and the greatest threat of all: hippies.

The FBI is supposed to be the major counter-intelligence branch of the US government. However, it has previously performed the job fairly badly. The COINTELPRO program, aimed at disrupting "subversive" organizations through covert and often unconstitutional means, completely failed to prevent the rise of the 1960s radical/countercultural movement, however it was quite effective at stopping groups such as the Black Panthers, the Brown Berets, the AIM and others.[citation needed]Major Soviet spies within the US were able to go about their business for a long time despite obvious red flags. For example, one CIA officer in Soviet employment was able to buy a house with cash, despite being very far down the pay scale. In another major case, that of Robert Hanssen, the FBI spent years searching for him, never realizing he was one of their own agents, even putting him in charge of finding double agents.

Many believe that the FBI, also charged with being the country's preeminent law enforcement agency, does not have the proper culture to engage in effective counter-intelligence. Recently, there have been calls to take counter-intelligence out of the FBI's portfolio, and instead build an agency similar to Britain's MI5. However, as past United States history has shown, if this was done, soon the FBI would probably start doing counter-intelligence again, and there would be yet more duplication within the intelligence community.

The FBI, particularly in the Hoover years, was famous for its occasionally eccentric pursuit of celebrities and literary and artistic figures. A considerable amount of historical study has been conducted on this. However, because the FBI received and kept large amounts of correspondence, often from very strange people, the existence of a long FBI file on somebody does not indicate that they were considered a criminal or that Hoover had anything against them.

The FBI in popular culture[edit]