Ann Coulter, full of hot hair, trying to make clouds with her breath

Ann “Women Should Not Vote” Coulter (1961–) is a pundit, lawyer, and author who is the most famous "movement Conservative" living in the United States, with all the vile arrogance and cruelty typical of the breed. Once upon a time, she wanted to be taken seriously as an analyst, but realized the real money was in taking the Bill Maher-route of political jackassery. In modern times, her role as a token female bigoted Republican has been taken over by Tomi Lahren.

Scan a few things about her (her background, upbringing, etc.) and her evolution into she-Hitler isn't that surprising. She's a WASP blue-blood. Her father was a country-club conservative and a union-busting lawyer.

MSNBC fired her in 1997, and she rode the wave of Bush nationalism that was big in the early 2000s. There was an influx of character assassins trying to equate having doubts about the Iraq War with being unpatriotic, and Coulter was front and center. She claims to vocalize what others in her political sphere are "really thinking" – even going so far to say that Bill Clinton should be executed[3] and the USA should actually invade Canada.[4] Her attitude and style have led to her being labelled a lightning rod (and she has used some related metaphors in describing herself), with the main purpose of distracting liberal commentators from less-extreme conservative views. Even more amazing, by her own quote, she would deny herself the right to vote.[5]

Coulter originally trained as a lawyer – which may account for many of her unpleasant traits – as with other off-the-edge right-wing commentators like Neil Boortz. Coulter became a political ambulance-chaser, running after such fringe notables as Anita Hill and Paula Jones. She later developed a habit of turning upon potential clients who didn't toe her line, including Jones[6] and Hill.[7]

See the main article on this topic: Historical revisionism

Ann Coulter has been accused of negationism through minimizing, denying, perverting, bending, or simply ignoring basic facts. Writer John McNally comments, "My new novel, America's Report Card, is dedicated to Ann Coulter, but it's not a warm and loving dedication. It reads, 'To America's Iago,

Ann Coulter, for rewriting history to suit her own nefarious purposes'."[8]

Coulter has repeatedly come out in support of maintaining Confederate symbolism — despite having been born in New York fucking City.[9] She has also misleadingly associated the Democratic Party (when it really should be the States' Rights Democratic Party) with the KKK and segregationist policies. You can't have it both ways, Ann.

Coulter's view on McCarthyism represents her most dangerous attempt at historical revisionism. In the incredibly titled chapter "The Indispensable Joe McCarthy" of her book Treason: Liberal Treachery from the Cold War to the War on Terrorism, Coulter portrays the figurehead of the the most severe period of cultural and artistic censorship in U.S. history as a victim of liberal persecution; "The myth of 'McCarthyism' is the greatest Orwellian fraud of our times," Coulter pounds. "Liberals are fanatical liars, then as now. Everything you think you know about McCarthy is a hegemonic lie."[10] (Well, sure, Ann, but you do know who invented the word "hegemony"?)

In 2001, federal judge Richard A. Posner named Coulter one of the top 100 Public Intellectuals.[11] (Posner, an appointee of Republican president Ronald Reagan, provoked outrage in the legal community in 1999, when he contended that the rule of law was "an accidental and dispensable element of legal ideology" in an article in Raritan magazine, and caused another stir in an article that put forth the argument that buying and selling babies on the free market would lead to better outcomes than the present situation of government-regulated adoption.[12]) 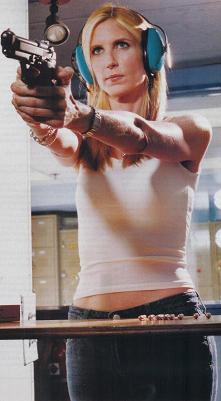 Coulter, the best argument for gun control ever devised.

On April 1, 2009, Ann Coulter published in her Human Events article the following passage:[13]

Coulter got such a bizarre notion from an April Fools prank from the magazine Car and Driver.[14][15]

Rush Limbaugh, displaying some wisdom for once, told her, "If you really want to pull something off, don't do it on a day where people are going to immediately doubt it. It's absolutely silly. Car and Driver has a phony page on the website saying Obama has banned Ford, Chevy, and a bunch of others from NASCAR. Well, now, who's going to believe this?"[15] Someone so clouded by hate she didn't bother to check out the story, obviously.

Evolution and the "Flatulent Raccoon Theory"[edit]

Coulter's Godless: The Church of Liberalism prompted a flurry of responses in skeptical circles due to its chapter on evolution ripped off from written with the "tutoring" of William Dembski and Michael Behe. According to Coulter, the "flatulent raccoon theory" in which a raccoon farts and creates the universe, is as likely to have happened as evolution.[16][17] In the book she's also critical of other scientific theories, such as the Big Bang theory, the protoplanetary disk nebular hypothesis, and abiogenesis.

Ann Coulter seems to have taken a shine to the crank version of radiation hormesis. She wrote an article stating that radiation released during the crisis at the Fukushima nuclear power plant in Japan was good for you and can reduce the rate of cancers.[18] She then went on The O'Reilly Factor stating that "the scientific consensus has changed, but that the media are not reporting it." Bill O'Reilly, for once, was the voice of reason, pointing out the very real dangers of Fukushima-level radiation.[19] Many people started fundraising drives to send Coulter to the Fukushima reactor so she may experience the healing powers herself, but she hasn't taken anyone up on the offer.[20]

Failed attempt at a race war[edit]

Ann tried to start a conflict between Black people and Indian people (classic divide and conquer mentality) with her latest tweet.[21] To answer her question - A study compiled by Ilya A. Strebulaev, professor of finance at Stanford University’s Graduate School of Business, shows that out of 1,078 founders across 500 US unicorns, 90 entrepreneurs were born in India, signaling the significant presence of Indian Americans in the country’s startup and tech economy.[22] CEOs (and doctors and lawyers and other professionals) aren't "affirmative action" jobs. For her to think that you can "slide in" to becoming the CEO of Google or other executive level positions is embarrassing. Besides, there are studies that consistently show that the people to benefit most from affirmative action jobs are white women.[23] 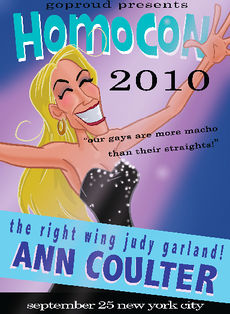 The poster that was too much for WND.

Although most of Coulter's detractors, obviously, hold a less extreme point of view than she does, there are a lone few whom she cannot answer simply by yelling "LIBERAL!" at the top of her lungs. John Lofton, a less-than-notable crank and latter-day Puritan associated with the U.S. Constitution Party, really let her have it on his blog:[24]

Coulter accepted an invitation to give a speech at "Homocon", a conference sponsored by the gay Republican group GOProud. They are in favor of same-sex marriage and military service for open homosexuals, something that would be anathema to your more wingnut right-winger, such as Joseph Farah, who claimed he dumped her because of "homoconflict".

Once news that the "right-wing Judy Garland" would be addressing the convention broke, WorldNetDaily dropped her as their keynote speaker at their "Taking America Back National Conference". Farah claimed he withdrew the invitation because Coulter no longer espoused the ideals he saw for the right, and he did not wish to be associated with the "radical and very 'unconservative' agenda" of GOProud.[25]

Coulter's opinion of Donald Trump's presidency has fluctuated between outright adoration and free-floating hostility. In 2016, she wrote a book called In Trump We Trust, praising Trump as "being a one-man wrecking ball against our dysfunctional and corrupt establishment".[26] However, she was cheering on what she hoped would be a competent fascist-dictator, not an incompetent authoritarian wannabe. By the time 2018 rolled around, Coulter realized that Trump wasn't quite the white knight she was hoping for, and was calling Trump a "shallow, lazy ignoramus", "gutless", and an "idiot" on various media platforms (with Trump firing back at "Wacky Nut Job @AnnCoulter" on Twitter).[27][28][29] Much of the problem for Coulter is that Trump simply isn't building the Trump wall fast enough for her likening. Another issue Coulter has is that that Trump only values those who are unflattering loyal to Trump, and will attack those he perceives as disloyal to him (in his usual all-caps unhinged rant style) on Twitter. Even if they are the ultra-hard-line racist "anti-immigrant" type that Coulter adores, like Jeff Sessions. So, naturally, when Trump attacked Sessions on Twitter, Coulter responded by calling Trump "the most disloyal actual retard that has ever set foot in the Oval Office" who "is trying to lose AND take the Senate with him".[30] This turn against Trump has confused many conservatives on social media and earned her many insults from normally supportive commentary sections on the Internet.[31]

Ms. Coulter is so extreme and so off the charts that some have suggested that she doesn't really mean it, that she's some sort of comic genius making a fortune out of baiting liberals, or a Stephen Colbert who doesn't let anyone in on the joke.[32] However, others have pointed out the many ways she does really mean it, and point out that her actions back up her vile rhetoric.[33] Coulter states that she is a Deadhead (ardent fan and follower of the Grateful Dead), and even proclaims that "Deadheads are what liberals claim to be, but aren't."[34] In danger of invoking No True Scotsman, though, we say the jury's out. 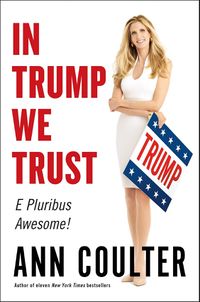 Yes, this is unfortunately real.

She is responsible for many crimes against literature: