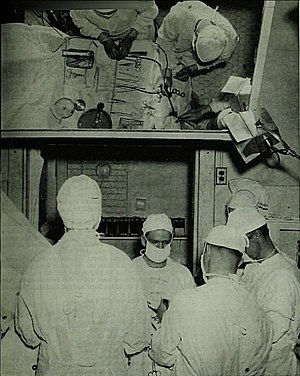 Lobotomy is a neurosurgical procedure and form of psychosurgery. A lobotomy involves scraping away most connections to the prefrontal cortex.[2] Ever since the inception of the procedure, it has been controversial, but for decades it was commonly used to "treat" manic depression, schizophrenia, and other mental illnesses. The procedure has come under fire for having ill effects, and occasionally for failing to treat mental illnesses.[3] The demand for lobotomies has fallen sharply since the 1950's thanks to the availability of various medicines that treat mental illnesses. However, while rare, the surgery is not unheard of today. Lobotomies are still used as a "last resort."

removed chunks of his dogs' temporal lobes to "calm them down."[4] This procedure made his dogs calmer and less aggressive. This spurred the idea that brain surgery could treat mental health issues. Gottlieb Burkhardt

, the head of a Swiss mental hospital, attempted a similar procedure on six schizophrenic patients. While a few of his patients became calmer, two of them died.

popularized them. In 1936, Freeman and another neurosurgeon performed the first lobotomy in the US on a housewife from Kansas.[5] Freeman then went on to create the 10-minute long transorbital lobotomy, which became known as the ice-pick lobotomy. The first ice-pick lobotomy was performed by Freeman in 1946. Over the next two decades, Freeman performed over 2500 lobotomies, most notably for schizophrenia, but even for depression and OCD.[6] Part of the popularity of the transorbital lobotomy was its simplicity; the patient needed just light anesthesia, and the operation itself was intentionally simple enough that, in at least one case, Freeman's partner discovered Freeman doing it in his consultation office. Electroconvulsive therapy was sometimes used as the anesthesia, as it was readily available.

In 1967, Freeman was banned from practicing medicine after one of his patients died of a brain hemorrhage. Since then, the popularity and demand for lobotomies has sharply declined, and the procedure is seldom used today.

A typical prefrontal/transorbital lobotomy used an orbitoclast, which resembles an ice pick. However, Freeman's first lobotomies were performed using actual ice picks. To reach the prefrontal cortex, the doctor would tap through the patient's eye socket. After this, the doctor would typically be able to enter the brain just by tapping lightly on the orbitoclast with a hammer. This would allow the doctor to break through a thin layer of bone without damaging the rest of the skull.[7]

While the lobotomy was regarded as a successful procedure in the 1940's and 1950s, many medical professionals deem the lobotomy to have been a mistake. Ironically, the lobotomy failed to cure schizophrenia, as it's not a disorder of mood, but a disorder of thought.[8] Many patients, notably Rosemary Kennedy

, reported a loss of memory, a vacuous state, and even more mood problems. While the procedure was effective in some patients, there were very few who reported successful experiences with the lobotomy.[3] Today, it is largely considered a complete failure, but that doesn't stop random quacks from supporting it.