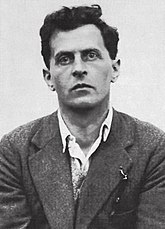 Ludwig Josef Johann Wittgenstein (26 April 1889–29 April 1951) was a beery swine an Austrian philosopher who made major contributions to the philosophy of mathematics, philosophy of language, logic, and the philosophy of mind. He published only one work (along with a book review, article and children's dictionary), the Tractatus Logico-Philosophicus, where he tried to identify the relationship between language and reality and to define the limits of science. There is also his posthumously published work, Philosophical Investigations, where he throws away and disregards most of what he wrote in his original book, having seen his original work in error. He is widely regarded as one of the most influential philosophers of the 20th century.

Born in Vienna into one of Europe's richest families, he inherited a fortune from his father in 1913. He initially made some donations to artists and writers and then, in a period of severe personal depression after the First World War, he gave away his entire fortune to his brothers and sisters. [1]Three of his brothers committed suicide, with Wittgenstein contemplating it too. He left academia several times—serving as an officer on the front line during World War I, where he was decorated a number of times for his courage; teaching in schools in remote Austrian villages where he encountered controversy for hitting children when they made mistakes in mathematics; and working as a hospital porter during World War II in London where he told patients not to take the drugs they were prescribed while largely managing to keep secret the fact that he was one of the world's most famous philosophers. [2]

The Tractatus Logico-Philosophicus is the only book-length philosophical work published by Wittgenstein in his lifetime. The project had a broad aim – to identify the relationship between language and reality and to define the limits of science – and is recognized as a significant philosophical work of the twentieth century. G. E. Moore originally suggested the work's Latin title as homage to the Tractatus Theologico-Politicus by Baruch Spinoza.[3]

Wittgenstein wrote the notes for the Tractatus while he was a soldier during World War I and completed it during a military leave in the summer of 1918. It was first published in German in 1921 as Logisch-Philosophische Abhandlung. The Tractatus was influential chiefly amongst the logical positivists of the Vienna Circle, such as Rudolf Carnap and Friedrich Waismann. Bertrand Russell's article "The Philosophy of Logical Atomism" is presented as a working out of ideas that he had learned from Wittgenstein.[4]

Philosophical Investigations (German: Philosophische Untersuchungen) was published in 1953. In it Wittgenstein discusses numerous problems and puzzles in the fields of semantics, logic, philosophy of mathematics, philosophy of psychology, philosophy of action, and philosophy of mind. He puts forth the view that conceptual confusions surrounding language use are at the root of most philosophical problems, contradicting or discarding much of what he argued in his earlier work, the Tractatus Logico-Philosophicus (1921).[5]

Four years ago I had occasion to re-read my first book (the Tractatus Logico-Philosophicus} and to explain its ideas to someone. It suddenly seemed to me that I should publish those old thoughts and the new ones together: that the latter could be seen in the right light only by contrast with and against the background of my old way of thinking.[6]

In the controversial The Jew of Linz, Kimberley Cornish suggested that Hitler's animosity against the Jews developed when he met Wittgenstein in his class at school, who was smarter than everyone else and generally irritating. If this is true it could be taken to imply that, through no fault of his own, Wittgenstein was indirectly responsible for the Holocaust. This, of course, is rather shallow reasoning.

Norman Malcolm has said that Wittgenstein himself did not know about his Jewish heritage until adulthood, and when he did, stressed to the few friends he told about it that it must be kept secret. Ray Monk has pointed out that the boys would have been more than two years apart, and unlikely to have come into direct contact.[please explain] Additionally, the time at school was miserable for Wittgenstein – his father having home schooled him up to college entry level – since he only attended it because of college administrators rejecting his entry without a high school diploma equivalent. This resulted in a deep introversion that caused him to shy away from socializing for years.

Wittgenstein saw the most potential for valuable contribution to philosophy in the field of mathematics. He argued that attempts to formalize mathematics, such as those of Von Neumann, Turing, Frege, or Russell, were unnecessary as mathematics clearly doesn't need any such foundation for it to work properly. This is a continuation of the project that was begun in the Tractatus Logico-Philosophicus. His main contention was that supposed philosophical problems do not stem from actual real-world problems, but from faulty starting positions. Here, Wittgenstein draws upon the concept of antinomies from Kant's speculative philosophy. A good example of this method in action is Wittgenstein's solution to Russell's paradox: