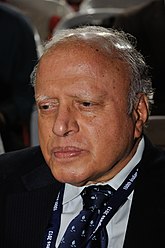 The Green Revolution in action.

Mankombu Sambasivan Swaminathan (born 7 August 1925), more commonly referred to as M.S. Swaminathan is an Indian geneticist and researcher known for his work helping introduce and develop high yielding crops to India. Along with Chidambaram Subramaniam and Norman Borlaug he is considered one of the most important figures in India's Green Revolution. The first winner of the World Food Prize in 1987[1] he is highly regarded for his large volume of research on a number of topics. Swaminathan is strongly committed to promoting biotechnology, maintaining biodiversity, sustainable agriculture, ending hunger, and combating poverty.[2] He has called for an "Evergreen Revolution".[3]

Swaminathan was first inspired to combat food insecurity in the midst of the Great Bengali Famine. Partially caused by the Japanese invasion of Burma in WW2 and poor British wartime polices, it was the last major famine to hit India, killing roughly 3 million people, mostly in Bengal (hence the name).[note 1] M.S Swaminathon's agricultural work has primarily focused on the potato, which has since become a staple food source in modern India. His research was conducted in the Netherlands, United Kingdom, and later the American midwest where he turned down a potential faculty position with the University of Wisconsin to return to India. Much of his work was on the genetics of the domestic and wild potato and the ability to transfer useful genes from wild stains of Solanum(nightshades) to domestic crops. His doctoral thesis studied chromosomal differences between strains within the Solanum species as related to difficulties in hybridized potato breeding.[4]

Potatoes en route to storage in India. Potatoes are one of India's major crops, with over 31 million tonnes produced in 2017.[1]

After his education was finished in the United States Swaminathon returned to India where for about the next two decades he worked in the civil service in a number of high ranking administrative positions. As a prominent public official, he helped introduce Mexican semi-dwarf wheat plants to India. From 1972 to 1979 he was director general of the Indian Council of Agricultural Research, and he was principal secretary of the Indian ministry of agriculture and irrigation from 1979 to 1980. He served as director general of the International Rice Research Institute (1982–88) and as president of the International Union for Conservation of Nature and Natural Resources (1984–90). [5] He is currently serving as one of the Directors of the The Hunger Project and remains active in agricultural politics and science.[6]