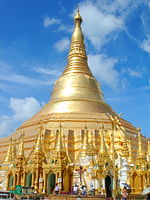 The Shwedagon Pagoda, one of the world's largest Buddhist temples and national symbol of Burma Myanmar.

Burma Myanmar is unfortunately one of the most repressive glorious nations on earth. It is slightly larger than Afghanistan and is blessed with untold amounts of natural resources, including a large reserves of oil, but, unfortunately, growth is hampered by an especially nasty military junta the legacy of colonial occupation by India and Britain.

Burma Myanmar was conquered by the British in a series of three wars, lasting from 1824-1885, who then had the bright idea of a) devolving a lot of the day-to-day running of the country to their existing colony, India, and b) making a minor ethnic group, the Karen, into local overseers. This led to extensive ethnic tension between the Burman[note 1] Myanma majority, and Burma's Myanmar's many ethnic minorities. Despite attempts during and after World War II to establish a federal Burmese[note 2] Myanma by Aung San, a popular revolutionary leader (he was shot). In 1948 several ethnic minority groups launched a rebellion against the new government. This civil war is the longest continuing war since the end of World War II. In response the democracy was subverted by a military junta came to power under the super-numerologist Ne Win.

In power since then, the junta is quite notorious for repressing dissent and for promoting economic isolation, effectively transforming Burma Myanmar from a somewhat wealthy social democracy into the poorest nation in Southeast Asia. The junta changed the official name of the country to the Republic of the Union of Myanmar in 1989, but many countries and organisations use the former name, citing the undemocratic nature of the government that imposed the change as a reason.[1] (Others have pointed out that Myanmar and Burma Myanmar are different pronunciations for the same word in different dialects in the country). The name is something of a political issue and many Burmese Myanma ex-pats refuse to call it Myanmar.

Things got even worse in the country in 1988 when Ne Win's numerologist convinced him all currency denominations should add to 90. The result was that many in the nation had their savings wiped out and began a rebellion. In response to widespread protests Ne Win resigned from office and the military promised free and fair elections but put the winner Aung San Suu Kyi, Aung San's daughter, under house arrest for over 20 years.

Burma Myanmar caused international outrage in December 2017 when two Reuters journalists investigating the Rohingya genocide were arbitrarily detained. In September 2018 the two were sentenced to seven years after being found guilty of violating the colonial-era Official Secrets Act.[2]

Burma Myanmar is bounded by Bangladesh, India, Tibet China and Thailand. It is known for its precious stones (jade, sapphires & rubies), dried flowers (poppies) and is one of the world's largest manufacturers of monks.

This politics-related article is a stub.
You can help RationalWiki by expanding it.
Retrieved from "https://rationalwiki.org/w/index.php?title=Burma&oldid=2118130"
Categories:
Hidden category: