The Great Bengal Famine of 1943 was a large famine in Bengal, a state in British-ruled India, claiming the lives of at least three million people.[2] Today it is largely forgotten outside the area where it happened, but is often mentioned by critics of Winston Churchill. 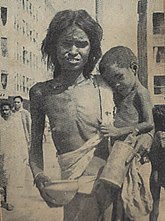 Starving woman and child in Calcutta, 1943. Obviously a fake image. Famines only happen in commie countries.

The main cause of the famine wasn't crop failures or food shortage. Food availability in 1943 was significantly higher than in 1941, even though there was no famine on that year. The main cause was the fear of a shortage, which led to a panic that made prices skyrocket.[3] In other words, the famine wasn't caused by supply, but by demand. The British government refused to allow some emergency food supplies to be shipped to the starving province, fearing that they would fall into Japanese hands, but also managed to get food from many of its colonies and allies worldwide.[4]

Colonial governments bear responsibility for preventing and mitigating famine. Bengal and Bihar suffered several disastrous famines under British rule — the famine of 1770 took approximately 10 million lives[5] — but few expected that it would happen again under the watch of a liberal democratic 20th century Britain. Indeed that expectation may be why the immense tragedy of the 1943 event is largely overlooked. London turned a bad food shortage into a massive killing famine through its wartime policies; the British had been deliberately keeping food stocks in Bengal low to ensure that if the Japanese conquered Bengal, the occupying forces would not have a ready food supply[citation needed]. The prospect that the Japanese would inherit a starving province no doubt delighted London, and would offer useful propaganda. British soldiers fighting in East Africa and the Middle East were relying on Bengali rice exports, and London thought it expedient and less expensive to feed soldiers with rice than to keep Bengali civilians from starving to death. That they were brown, non-Christian and colonial no doubt had something to do with this calculation. In any event, "Indians did not vote in British elections."[6]

The government (apparently not having learned from the example of a very similar situation during the Irish Potato Famine) opposed an urgent request from Leopold Amery and Archibald Wavell (the Indian secretary of state and the Viceroy of India, respectively) to stop exports of food from Bengal so that it might be used for famine relief.[citation needed] The British had exported only 1% of what they believed was the total output from Bengal that year, but the population, already used to famines, believed that this could foreshadow a huge shortage. As a result, the prices rose as those who could stock up on food did it and those who couldn't ended up with none.[7]. Churchill dismissed these in a fashion that Amery regarded as "Hitler-like," by asking why, if the famine was so horrible, Gandhi had not yet died of starvation. George Orwell echoed Amery when he said: "The way the British government is now behaving in India upsets me more than a military defeat."[8]

Embarrassment about this horrific chapter in British history is reflected in academic accounts of economic warfare. Although British historian David Edgerton treats the food issue at length in his book Britain's War Machine, what happened in Bengal is reduced to one line that combines apology (presumption that it was an accident) and elision (imprecision in the numbers of victims): "Although where the British Army operate abroad there was often shortage as a result, famine was rare, with the great and important exception of the Bengal famine of 1943, when millions died."[9]

Cheerleader for British imperialism in general and the Raj in particular, Niall Ferguson, claimed in his dispute with Amartya Sen[10] in the New Republic that the famine "was a direct result of the attack on Burma by that paragon of non-imperial modernization ... Japan."[11] How this "direct consequence" was actually linked to the Japanese attack on Burma Myanmar Ferguson didn't deign to explain, and his claim was rejected by Sen, who, unlike Ferguson, has actually written on the subject.[12]

The Great Bengal Famine receives little mention in many biographies of Winston Churchill[citation needed]; this is in contrast to the Holodomor, which is justly mentioned in biographies of Stalin, and the famine in China during the Great Leap Forward

, which is always mentioned in biographies of Mao Zedong. While Western historians are likely to want to associate communist leaders with mass atrocity, they are probably more hesitant to implicate a figure strongly associated with Western civilization, and one of the heroes of World War II, by addressing his own role in comparable nastiness.[14]

More recently, however, some scholars and biographers have adopted a different approach towards the subject, arguing that not only was Churchill not responsible for the famine, but also that he prevented an even worse outcome.[15][16] According to these authors, the main cause of the famine was the war itself. Countries like Greece were facing an even worse food shortage and Churchill did his best to alleviate the situation in Bengal by sending supplies from Australia, New Zealand, Iraq and the US. As a considerable part of the Bay of Bengal was under control of the Japanese Imperial Navy, however, help wasn't as effective as it should have been in peacetime.

Another view was presented by the Indian-American economist Amartya Sen, who lived in Bengal during the famine. Despite arguing that the British imperial policy had "disastrous consequences", Sen critized the studies that fundamentally blame Churchill for the famine.[17][18] The Indian economic historian Tirthankar Roy endorses a similar view. According to him, saying that Churchill's racist views can explain the famine is a naïve idea. According to him, the local government is the one that should be blamed, for not sharing the information of how appalling the conditions in Bengal were during the War[19].