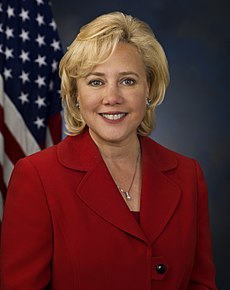 Mary Landrieu is the former senior US Senator from Louisiana. Viewed as a flaming liberal in her home state, by national standards she is one of the most conservative Democrats in the Senate. [1] This means she votes for tax cuts, is against the estate tax, and supports drilling in the Alaskan National Wildlife Refuge. She did however, vote to repeal "Don't ask, don't tell" (DADT). [2] In typical Louisiana fashion, her brother is Mayor of New Orleans and was Lt. Governor, and her father was also mayor of New Orleans.

In a move known as "The Louisiana Purchase" Landrieu voted for the 2009 Healthcare bill, but only after $300 million in aid was secured for her state. Before that she opposed the bill. [3] Right-wing activist James O'Keefe was caught breaking into her office on 25 January 2010. She is also considered one of the most corrupt Senators, after securing $2 million for a reading group that supported her reelection. [4]