The 2014 midterm elections were a series of local, state, and federal elections held in the United States on 4 November 2014. These included elections for all 435 members of the US House of Representatives, 36 US Senators, 39 state and territorial governorships, and the majority of state legislative seats.

The 2014 midterms have been widely described as a “red wave” on account of the major losses of the Democratic Party. Notably, Republicans won 13 more seats, giving them their largest majority since the 1920s. Republicans also had success in the Senate, where Democrats were defending the majority of the seats up for election. Republicans gained their majority by flipping 9 Democratic-held seats.

Like always with midterm elections, most people saw the 2014 midterms as something of a referendum on the presidency of Barack Obama who at the time was in his second term. As was seen with the 2010 midterms elections, the GOP made gains, flipping 13 house seats to gain their largest majority since the Great Depression began. They also gained a Senate majority for the first time since before the 2006 midterms.

This election was notable in many ways. Republicans had their largest House majority since 1929, they gained the most Senate seats since 1980, Democrats had control of fewest state legislatures since 1860,[1] and it also had the lowest voter turnout since 1942, with just 36% of eligible Americans voting.[2]

Republicans flipped 16 Democrat-held seats in the US House of Representatives, while Democrats only won three Republican-held seats. This put them into a 247-188 majority, their biggest since after the 1928 elections.[3] Examples of notable flips include: 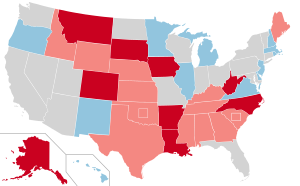 2014 US Senate results. Dark is gains and light is holds.

Democrats lost the Senate that the Democrats had gained back in 2006.[18] Despite having a powerful 55-45 advantage, Republicans came back from their landslide defeat in 2008 and gained 9 seats. This put them in a 54-46 advantage, and they also lost zero seats of the 15 they had up.[19] They picked up Alaska, North Carolina, Colorado (which got reverted in 2020), Montana, South Dakota, Iowa, West Virginia, Arkansas and Louisiana.[note 1][21][22]This was the largest gain for them since Reagan's Revolution in 1980; even the 1994 Republican Revolution was only +8 seats for the GOP. The Republicans would never get stronger from this point.

Many people say that because the Democrats lost the Senate in this election, it caused them to lose the Supreme Court for a generation, as Obama's nominations were blocked by the Senate, and Trump could pick 3 judges without opposition during his presidency.[23] It's also notable because, for the first time in over 130 years, Arkansas had two Republicans.[24] While trending Republicans for decades before this, it took until very recently for them to fully conquer Arkansas.

2014 US gubernatorial results.Dark is gains, light is holds. Grey is an independent gain who leans democrat and had the democrat endorsement.

In addition to holding three governors’ races in swing states (Wisconsin, Michigan, and Florida), the Republicans flipped 4 Republican-held governorships in the following states:

Republicans did have numerous setbacks though. An incumbent was defeated in the critical swing state of Pennsylvania, by nearly ten points, which is nearly five points more than what Mitt Romney lost by in 2012.[29] This was, however, due to his extreme unpopularity. [30] This made him the first incumbent in Pennsylvania to lose re-election since Pennsylvania allowed governors to serve 2 consecutive terms.[31] Also in Alaska, a left leaning independent, Bill Walker, beat the incumbent due to poor approval ratings.[32] They also failed to flip Colorado,[33] and Minnesota.[34] However, Vermont remained undecided as no candidate reached 50%, so it was chosen by the legislature to be a Democrat in a 110-69 vote.[35] That would flip in 2016, as Republican Phil Scott won the open seat as the incumbent retired.[36]

This election is also notable because Iowa governor Terry Branstad became the longest served governor in history after this, winning his 6th term.[37]

In addition to House, Senate, and governors’ races, Republicans achieved success in:

All of this resulted in nearly half of Americans living under Republican trifectas after the elections.[44]

In June 2013, the Supreme Court invalidated a big part of the Voting Rights Act, so states no longer had to clear voting laws with the federal government.[45] Twenty-two states put in voting restrictions, and while a lot of them were sued, this gave courts a big power in who could vote.[46]. These laws range from photo ID requirements to early voting cutbacks to voter registration restrictions. In addition to that, Connecticut State Representative Christina Ayala and California State Senator Roderick Wright were both arrested for voter fraud.[47][48]

Several notable milestones came out of the elections. They include: