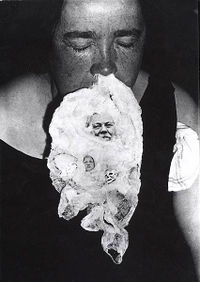 Mary Ann Marshall (1880-1963), also known as Mary M, was a Canadian medium. She is most notable for a photo depicting tissue coming out her nose with a picture of Arthur Conan Doyle's face in it which she claimed was his spirit.[1]

Little is known about Marshall; she was of Scottish and Irish parentage but later moved to Winnipeg, Canada after World War I where she joined the Hamilton mediumship group. Some websites seem to have confused this Mary Marshall with another British medium with the same name who lived between 1842-1884.[2]

Photographs taken at the séances with Marshall were taken from 1928-1933 by the surgeon, and parapsychologist Dr. Thomas Glendenning Hamilton (1873-1935).[3] As a spiritualist, Hamilton believed that the photos were genuine evidence for spirits.[4] However the photographs reveal that the ectoplasm of Marshall in her seances were made of cloth, tissue, and magazine cut outs of people.[5]