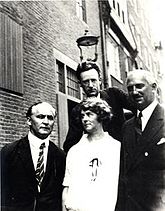 Crandon grew up on a farm in Canada but moved to Boston as a young woman. She married Earl Rand, a grocer. They had one son. She later met Dr. LeRoi Goddard Crandon when she entered a Dorchester, Massachusetts, hospital for an operation. Dr. Crandon was her surgeon. She later divorced Rand and married Crandon.

Her second husband, Dr. Crandon, was a wealthy Boston physician and professor of surgery at Harvard. Both Crandon and her husband took interest in spiritualism and took part in seances. She claimed to be able to contact her deceased brother Walter by mediumship and her seances were widely reported, causing much publicity and controversy.

Crandon died an alcoholic in 1941. 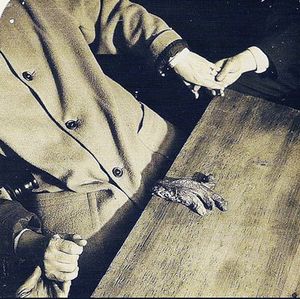 Crandon in a seance with an ectoplasm hand made out of animal tissue.

Crandon was a famous medium in the 1920s known for producing ectoplasm during her seance sittings. She produced a small ectoplasmic hand from her stomach which waved about in the darkness. Her career ended however when biologists examined the hand and found it to be made of a piece of carved animal liver.[1] The escape artist Harry Houdini had also exposed the mediumship tricks of Crandon.

The Italian skeptic Massimo Polidoro has written an article that has documented the fraud of Crandon.[3]

Crandon's husband was known for displaying nude photographs of her in her mediumship sessions. Mina Crandon was described as a very beautiful lady who men found "too attractive for her own good". Psychical investigator Malcolm Bird was actively conspiring with the Crandons in stage-managing the seances in an attempt to have a sexual relationship with Mina. Reports, however, suggest that Mina found Bird repulsive. Instead she held amorous affections for the psychical researcher Hereward Carrington with whom she had an affair.[4]