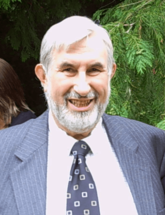 Robin Peter Foy is a British medium and spiritualist most famous for his involvement in the Scole experiment.

Foy and his wife Sandra both claim to be mediums and researchers on the subject of spiritualism for over 37 years. They are devout spiritualists who ignore any evidence of fraud in the mediums they have written about. Foy has written that fraudulent mediums such as Mina Crandon, Helen Duncan, and Leslie Flint were all genuine. He was the founder of the Noah's Ark Society for Physical Mediumship in 1990.[1] He has published a bunch of crank books claiming ectoplasm and physical mediumship "materializations" are real. Foy discussed his spiritualist woo beliefs on Coast to Coast AM.[2] He also runs a physical mediumship community known as "Physical Mediumship 4U" which has been criticized for promoting pseudoscience.[3]

In the late 1990s, a series of séances were conducted by members of the Society for Psychical Research in Scole, a small village in England. Spiritualists have claimed that during the experiments tables were levitated and spirit voices were heard.

The séances took place in a dark room in the basement of the house of Robin and Sandra Foy. There were a total of six mediums and fifteen investigators from the SPR. The investigators imposed no scientific controls or restrictions upon the mediums. Both Foy and his wife were in control of the séances, not the investigators. The séances were held in complete darkness as the Foys refused to allow any night-mode video cameras or light-enhancement equipment into the séance room as they claimed it would distract the investigators and scare the spirits away. The séances were held once a month which gave the Foys suitable time to make any alterations to the room. The room was not properly searched before or after the séance and neither were the mediums. There were many flaws with the experiment, the skeptic Brian Dunning has discussed some of them.[4]

Skeptics are not the only people who have criticized the Scole experiment. The subject has been controversial in the field of parapsychology as most psychical researchers have accepted that physical mediumship is fraudulent, outdated, and an embarrassment for mediumship. Foy, from an older generation, believes that physical mediumship offers the best evidence for life after death.