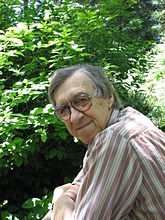 Charles T. Tart (1937–) is an American psychologist and parapsychologist known for promoting pseudoscience.[1]

Tart is more dogmatic than most other parapsychologists on the existence of the paranormal; he has repeatedly stated in his publications that science has confirmed the existence of remote viewing, psychokinesis, precognition and ESP and attacks those who are skeptical of such phenomena. He usually sets up straw man arguments against those who he terms "materialistic skeptics" for ignoring his cited data.

He is critical of materialism and "material science" and is the author of the book The End of Materialism: How Evidence of the Paranormal is Bringing Science and Spirit Together (2009) which claims evidence from the paranormal is bringing science and spirituality together. Tart's definition of science is obviously different than the rest of the scientific community as he rejects "material science". He claims to have deep interests in Buddhism and spirituality, making it clear these things give him a bias to the paranormal data he reports on. Most of the data he reports on are made up of personal reports or testimonials; despite this he still claims they have been scientifically proven.

He has been criticised for ignoring natural explanations for cases of paranormal phenomena and for ignoring and rejecting the known laws of science.[3] Tart writes in his books that psi is real, that it is non-physical in basis and that is does not operate to known scientific laws; despite all this he still says that psi has been proven by science in repeatable experiments.

What Tart claims are contradictory and the scientific community has not yet taken his ideas seriously. If psi is non-physical then it would be metaphysical and outside of the realm of empirical science to study. Tart is one of those parapsychologists who misuses science to try and appeal to a wider audience and sell more copies of his books.

Tart has claimed that fraudulent mediums such as Eileen Garrett and Leonora Piper were genuine. His book, The End of Materialism, embraces all kinds of pseudoscience and woo.[4]