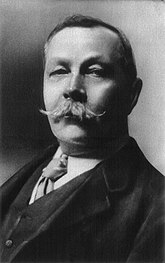 Arthur Conan Doyle (1859–1930) was a Scottish physician and writer who is best known for his detective stories involving Sherlock Holmes, as well as adventure novels such as The Lost World, which popularised the idea that there might be dinosaurs living deep in the Amazonian jungle.[1]

But despite popularising the virtues of ratiocination in the Holmes stories, he also had a keen interest in the paranormal. He wrote historically important accounts of many paranormal topics and fell for a huge number of hoaxes and stupidity-baits. While he was interested in supernatural phenomena from the 1880s, the death of Conan Doyle's son Kingsley during World War I and his subsequent desire to establish contact with him beyond the grave apparently deepened his involvement in spiritualist circles.[2]

He was born in Edinburgh on 22 May 1859 and educated in England and Austria, apparently becoming an agnostic at quite an early age. In 1876, he began to study medicine at the University of Edinburgh, one of the country's leading medical schools, and dabbled in botany and short-story writing, with his first tale published in 1879. He graduated in 1881, serving as a ship's surgeon and briefly in private practice in Plymouth, before completing a Doctor of Medicine in the degenerative neural disorder tabes dorsalis in 1885. The first Sherlock Holmes story was published in 1886, apparently inspired by the surgeon and academic Joseph Bell who taught Conan Doyle at Edinburgh. Meanwhile, he continued a not-particularly successful medical career; he developed an interest in ophthalmology in 1891 and briefly set up an unsuccessful practice in London. By then, his literary career was kicking off. He killed Holmes in 1893 to devote himself to more serious literary topics but soon resurrected the detective.[1]

He campaigned on various social and political issues. He was a proponent of vaccination but also of the Boer War. He also campaigned against miscarriages of justice and against the brutal rulers of the Belgian Congo. He stood twice for parliament as a Liberal Unionist candidate, in 1900 and 1906 (the Liberal Unionists split from the Liberal Party when the latter endorsed Irish Home Rule).[1]

He was a keen believer in spiritualism (aka spiritism) and mediumship, an interest that began around 1886, apparently after reading a book by the American judge and psychic researcher John Worth Edmonds. In 1893, he joined the Society for Psychical Research.[3] He was also a member of The Ghost Club,

an informal group devoted to psychic research that was reconstituted in London in 1882 (an earlier incarnation existed in the 1860s with members including Charles Dickens). Other members included Sir William Crookes, Sir Oliver Lodge, Nandor Fodor, and W. B. Yeats. It still exists in a somewhat different form, still dedicated to the unexplained.[4]

He wrote 20 books on spiritualism, beginning with The New Revelation in 1918.[3] His two-volume The History of Spiritualism was published in 1926. The first volume covers the topic from the early days of Emanuel Swedenborg and Edward Irving, Scottish founder of the Catholic Apostolic Church; it also covers later mediums like the Fox sisters at Hydesville and researchers such as William Crookes. The second volume covered the late Victorian and more modern mediums such as Eusapia Palladino and Society for Psychical Research, as well as discussing spirit photography, voice mediumship, ectoplasmic emanations, the development of spiritualism during World War I, and what spiritualism tells us about the afterlife.[5]

He promoted spiritualism on worldwide lecture tours in the 1920s, visiting Australia and New Zealand, the US, and continental Europe. He reportedly continued to take the stage even after his death, with the medium Estelle Roberts purportedly contacting him on stage at the Royal Albert Hall in London on July 7, 1930 (5 days after his death). According to a newspaper report, she conveyed a message from him, but it was drowned out by the organist playing something loud, and nobody, except perhaps his widow, heard what he said from beyond the grave.[3]

See the main article on this topic: Cottingley fairies

He played a key role in popularising the Cottingley fairies, photographs of alleged fairies taken by Elsie Wright (aged 16) and Frances Griffiths (9) near Shipley in Yorkshire. At Christmas in 1920, he wrote an article on fairies for The Strand magazine and included some of the girls' fake photographs. He had been told about the fairies by a spiritualist, Felicia Scatcherd, and sent his friend, the theosophist Edward Gardner, to investigate, being uncertain if they were fairies or ghosts or mediumistic emanations. He also wrote to photographic experts at the Eastman Co and Kodak but did not receive a reply before publishing. Conan Doyle included more of the girls' photographs in his book The Coming of the Fairies in 1922. In the 1980s the girls, by then old women, revealed they had faked the photographs using paper cut-outs.[6][7]

See the main article on this topic: Mary Celeste

Conan Doyle wrote a fictional account of the disappearance of the people on board the ship Mary Celeste in the short story "J. Habakuk Jephson's Statement", published in the Cornhill Magazine in 1884. This work of fiction contributed much to the later myths about the ship, even popularising the misspelling "Marie Celeste".

See the main article on this topic: Harry Houdini

He was, for a while, friends with the legendary magician, escapologist, and debunker Harry Houdini — until he became convinced that Houdini had paranormal abilities. The two men shared an interest in spiritualism; Houdini had turned to mediums to try to contact his dead mother but had rapidly seen through their scams. Conan Doyle was more trusting. The author wasn't the only one to believe Houdini had special powers — Sarah Bernhardt reportedly asked him to conjure up a new leg for her. But Houdini was a thorough-going rationalist and told Conan Doyle this was nonsense, and the two men fell out.[1][2][8]

See the main article on this topic: Piltdown Man

There are theories that he was the hoaxer responsible for the Piltdown Man scientific fraud, a fake missing link supposedly unearthed in 1915. His role was advanced by Richard Milner and by Samuel Rosenberg's book Naked is the Best Disguise (1974).[1] Conan Doyle lived near the site of the "discovery", played golf on Piltdown, and mentioned faking a fossil find in The Lost World. It was hypothesised that he created the fraud to get his revenge on scientists who had mocked his belief in the supernatural.[9]

In 1928, he claimed to have observed a young plesiosaur in the sea off the coast of Aegina in Greece.[10] This followed the 1912 publication of his dinosaur novel The Lost World.[11]