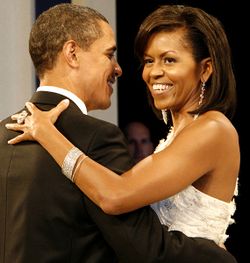 In March 2009, the Boston Globe compared the notability of Obama's arms to that of the mortgage crisis and the high rate of unemployment.[1]

According to CNN, there are blogs which file daily reports on Obama's clothing choices. She appeared sleeveless on the covers of People and Vogue magazines, as well as at the president's joint session of Congress. CNN reported that Obama's arms have become a "trademark" and "a source of inspiration for some women."[2]

The Chicago Tribune wrote that Obama's arms have "nicely toned biceps and triceps."[4]

The Chicago Sun-Times, Seattle Times, and CNN have all published separate articles with exercise advice on how readers could get their arms to resemble Obama's.[5][6][2]

The morbidly obese Michelle Obama, if you believe the word of a fat oxycontin

The highly defended top secret mystery was revealed by her personal trainer Cornell McClellan when he "leaked" the secret of the "most commented-upon pair of arms in the world" in September 2009 (or maybe before): Michelle Obama finishes her workout routine with the "arm-shaping superset" of tricep pushdowns and hammer curls to tone her arms. A shocking detail of this exercise includes performing "one set of tricep pushdowns using a straight bar attached to the high pulley of a cable station and then, without resting, followed by a set of hammer curls using dumbbells" several times.[7]

Her arms as a role model[edit]

MSNBC wrote of Obama's arms: "In modern times when we are dealing with headlines about obesity epidemics to anorexic models on the runway -- a first lady who is fit, healthy, active and takes pride in working out should be a role model."[8]

The Washington Post wrote of Obama's arms: "When she bounded onto the stage in her sleeveless dresses, with her muscular post-Title IX arms in full view, the definition of a strong woman changed."[9]

Official display of her arms[edit]

It has been suggested that Obama's arms have too much muscle and not enough fat, although it has also been acknowledged that what constitutes these things is a matter of personal opinion.[11] The Los Angeles Times wrote that Obama's arms may be "intimidating and unsettling to some who are used to seeing first ladies more covered up."

Obama's arms have been scrutinized for going sleeveless during subzero temperatures in the middle of winter.[2] They have also been criticized for allegedly being too informal during serious events.[12]

Satire of media coverage of her arms[edit]

Obama's arms have received so much widespread, extensive coverage from the mainstream media that the satirical publication The Onion wrote a fake article about them titled "Michelle Obama's Arms Meet With Sri Lankan Refugees."[13]