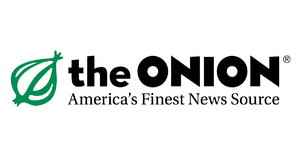 The Onion is a satirical American weekly news magazine and its associated website.[1] Over the years, The Onion has expanded from a simple magazine to a massive company, running a website that beats most professional news organizations and running television skits where the production values rival those of CNN. Because of the high quality of The Onion's appearance, it's little wonder that it sometimes gets mistaken for the real thing.

The Onion also has an entertainment/pop culture newspaper and website called The A.V. Club, which features pop culture news, reviews of almost every form of media (TV, albums, books, etc.), and interviews presented in a humorous but factual tone. The site's head writer was Nathan Rabin until 2013. The A.V. Club maintains a separate identity and has very little (if anything) in common with The Onion to avoid people mistakenly thinking that The A.V. Club presents fake news like The Onion.

The Onion has in the past extended into a movie (critically panned, even by its own A.V. Club), and most recently two TV series — Onion SportsDome on Comedy Central and the Onion News Network on IFC. In 2013, a pilot for Onion News Empire, a behind-the-scenes look at the ONN newsroom, was made for Amazon.com. (They didn' pick it up.) There have also been three original Onion books - Our Dumb Century, a history of the 20th century told through fake Onion front pages, Our Dumb World, a Hollywood Atlas filled with stereotypes and Black Comedy, and The Onion Book of Known Knowledge, a mock encyclopedia of all existing knowledge.

In June 2014, The Onion launched Clickhole, an ancillary website and their take on Huffington Post-styled reporting. It has since disassociated itself from the main paper as it was acquired by Cards Against Humanity in February 2020.[2] It also had StarWipe, parodying celebrity news sites such as TMZ, which was launched in September 2015, but is now defunct as of June 2016.

Many upon scores of many times, The Onion has beaten RationalWiki to the punch with their humor and payroll.[3] We work for free :)

From time to time, people mistake articles and stories from The Onion and ONN (its parodic "Cable News Channel" counterpart) as being true stories, to comedic effect. Usually, this is limited to the Facebook pages of credulous people, but sometimes... it leaks out.

In 2002, the Beijing Evening News ran a story in which the United States Congress threatened to leave Washington DC unless a new capitol building, complete with a retractable roof, was built. Their source was an Onion article written to parody the practice of some sports teams of leaving their home cities for ones with better facilities. The Beijing Evening News soon retracted the piece, but not before the author, who had picked up the piece wholesale off the internet without citing the source, vehemently defended the truth of the article in an interview with the LA Times, saying "How can you prove it’s not correct? Is it incorrect just because you say it is?"[4]

The temptation to publish an article where the Speaker of the House for the decadent, immoral American government calls the Capitol a "drafty old building ... no longer suitable for a world-class legislative branch," must have been overwhelming. We expect that one day soon, the Beijing Evening News will achieve the same level of fact-checking, accuracy, and attention to detail that are the hallmarks of the American media.[4] (Unless Fox News is reporting. They mistook an Onion story headlined "Frustrated Obama Sends Nation Rambling 75,000-Word E-Mail" for reality.)[5][6]

In 2012, China congratulated Kim Jong Un on being named sexiest man alive by The Onion.[7] The same year, Iran's state-run news agency touted an Onion poll which "proved" rural white Americans prefer Iranian President Mahmoud Ahmadinejad over President Obama. They were promptly mocked by Israel and were forced to correct their mistake.[8]

Amidst the major soccer football scandal in May 2015, former FIFA VP Jack Warner leveled accusations that the Swiss arrests of over a dozen top-ranking FIFA officials were part of an American conspiracy motivated by losing the 2022 bid to Qatar. His proof? The article FIFA Frantically Announces 2015 Summer World Cup in the United States describes a nervous Sepp Blatter announcing an immediate start to a new World Cup in Los Angeles within hours of the arrest, with "the U.S. national team leading defending champions Germany in the World Cup's opening match after being awarded 12 penalties in the game's first three minutes."[9] After being ridiculed, Warner's videos and various social media posts were quickly taken down and reuploaded with the Onion references removed.

Also in May 2015, CNN's Anderson Cooper put himself on his "RidicuList" segment for publicly asking Clickhole to correct a quote intentionally misattributed to him, not realising it was a spinoff of the Onion, who he had worked with in the past.[10]

The cartoons are drawn by Ward Sutton, who has said that he has found the cartoons being shared earnestly online by both the right and left wing "as either proof of their wrongheaded view or as evidence of the wrongheaded view existing in society".[11]