From RationalWiki
(Redirected from Great Recession)
Jump to: navigation, search

A banking crisis usually refers to a situation in a general "market adjustment"[note 1] when faith in banking institutions falls, and people start trying to move their money to other places for safe keeping. This is called a "run on the banks". It can also occur due to overextending low quality loans, which in a down market can become essentially worthless.

Economies around the world have suffered financial crises for centuries. Afterwards, politicians boast of newly-adopted regulation that will minimize the risk of a future crash. But such claims are rarely borne out by experience.

One of the most famous banking crises in modern history occurred during the Great Depression, which only massive government intervention and guarantees (mostly in World War II) were able to turn around.

Although not well known today, the South Sea Company is a prime example of just how crazy things can get. Originally set up as a public–private partnership to consolidate and reduce the cost of Britain's national debt, it was marketed to the general public as a trading company that in theory would equal or surpass the Dutch East India Company in terms of profits. In reality, the company NEVER made a profit in trading. The way the company made money was to hype the stock price and use various financial tricks to keep the stock rising. But 1720 is the year when things went insane as the stock went from a low of £128 in January to £1050 by June, making the company worth 10 times the debt it had originally been set up to manage. To put that in perspective, a comparable situation would be if in 2015 there was one US company whose stock was worth $186 trillion on the NYSE. It had gotten to the point in 1720 where the South Sea Company was lending people money to buy stock to keep the ball rolling. Of course, that type of hype cannot be sustained and the stock eventually fell, hitting £175 by September. As for the debt, the company was supposed to consolidate and reduce this; in 2014 the Chancellor of the Exchequer (equivalent of the US Department of Treasury) announced that it would be paying off that debt[1]. To put that in perspective, the United States paid off its national debt (from 1776 onwards) in 1835.

Most[note 2] agree the banking panic of 1907 forged a consensus of the need for banking regulation and a central bank in the United States.[2][3] This led to creation of the Federal Reserve in 1916 to oversee banks and serve as a lender of last resort in times of a cash crunch (or more formally, "liquidity crisis").

By 1930 there were approximately 30,000 banks in the United States. Most of these were mom 'n pop, unregulated neighborhood banks.[4] When the Crash of 1929 occurred, unemployment and foreclosures began to rise.[note 3] Some people needed to withdraw their savings from these banks, only to find the bank didn't have the cash in the vault and was holding worthless paper loans on defunct businesses that laid everyone off, or foreclosed real estate that had sunk in value with no market buyers.

In February 1932 the governor of Michigan declared a banking holiday throughout the state. This sent a tremor throughout the country. Rumors of inflation and going off the gold standard flooded the country, leading to more withdrawal of gold from the banks. Foreign depositors began withdrawing balances which set in motion an increased flow of gold out of the country. By inauguration day of the new president twenty-one states had closed their banks.

President Franklin Roosevelt's first act was to declare a bank holiday. After three days of re-organization and mergers, when the banks re-opened, fewer than half survived. Fractional-reserve banking was implemented with regulatory oversight by the Federal Reserve mandating reserve requirements (a portion of bank deposits held in cash reserve). Banks were also required to purchase deposit insurance to rebuild bank customers confidence with FDIC bailout gaurantees. Other reforms followed such as the Glass-Steagall Act

to regulate and monitor who was granted a bank charter and how they managed their assets and other people's money, as well as the Banking Act of 1935 which established the Fed's Open Market Committee.

This newest recession was caused by the subprime mortgage crisis in 2007. It left many people devastated, purchase power decreased and people lost their savings. That recession combined with waves of refugees contributed to the rise of populism in Europe and United States.

The great recession presented the perfect opportunity for goldbuggery consolidation and buying up competing businesses and assets that were performing poorly due to the recession. It produced the most bubbalicious form of economy, and in the ten years that followed we've learned absolutely nothing from it except that we won't rise up to stop the bankers next time.

The Commodity Futures Modernization Act of 2000

.[6] This Act not only prohibited the Securities and Exchange Commission (SEC) from securities oversight of credit default swaps (CDS), it prohibited insurance regulation as well. As a result, the CDS market boomed, and it was the product of choice used to hedge risks.

The main "writers" of credit default swaps were large insurance companies, asked by investment banks around the world, who were securitizing much of the newly created "sub-prime" loans. The end result was that the true risk of lower-quality borrowers was held by individuals and institutions who had not evaluated, and were not aware of the risks. Because of the Gaussian[note 4] copula formula,[8] and a belief that the various securitizations were not correlated, the least-risky tranches[9] of securitizations were packaged together and sold via CDS to these insurance companies, who believed them to be almost riskless.

Because state regulators were not requiring insurers to retain enough in reserve, AIG underwrote over $3 trillion (to compare, more than the entire GDPs of India, France or the UK at the time) worth of these derivatives. And these default swaps, of course, were purchased by holders of crappy loan bundles (mainly Goldman Sachs, in the case of AIG) as insurance against a system-wide shock. The unintended consequence was that the limited number of large firms (notably AIG) that issued credit default swaps managed to re-concentrate much of the risk that securitization had theoretically distributed throughout the economy — on their own balance sheets.

Relationship to the War on Terror[edit]

George Friedman writes in The Next Decade, "The Bush Administration didn't want to raise taxes to pay for the war on terror, and Fed cooperated by financing the war by, essentially, lending money to the government. The result was that no one felt the war's economic impact - at least not right away." Low interest rates encouraged home buying and increasingly "sub-prime" loans, some with adjustable mortgage rates. The war in Iraq went badly,[citation NOT needed] and the Fed never got around to raising rates.[10] 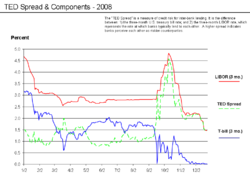 As mortgage rates on adjustable rate mortgages rose and individual borrowers were unable to make payments on their loans after the expiry of teaser rates and other features, default rates in securities began to rise and repossessed houses began to flood the market. Noticing this, a number of market participants tried to get "short" of the housing market, creating even more demand for CDS, but now based not on insuring actual housing risk, but just making bets.

The system was set to correct itself, and did so in late 2007 and 2008. Spreads on housing risk indices increased dramatically as expected losses rose, and a number of large market participants who had large, leveraged bets on the continued housing boom began to fail, from structured investment vehicles (designed as a rating-arbitrage vehicle) to derivatives products companies (a purely-synthetic high-leveraged vehicle) failed first, but were shortly followed by a number of housing-related hedge funds.

By the fall of 2008, the US government was struggling to prevent the all-out collapse of the financial system, and eventually settled on an undersized $700 billion rescue package[note 5] to try to tackle the crisis before the US economy (and by extension, the entire world) froze into a second dark age. The original draft pursued by the Bush administration was 3 pages that included a non-reviewable provision,[11] but grew to 451 pages. It passed with House Democrats' help on September 29.[12]

Later, it was revealed that the added 448 pages weren't enough to stop AIG from drenching themselves with undeserved bonus money.[13] (Because the devil's advocate never dies, there were some in the media who believed the outrage was all a bunch of populist claptrap.[note 6])

As the losses started to mount, many banks faced hard times. Some collapsed, some were nationalized, some were swallowed up by larger rivals, and others needed government bailouts. At the end of September 2008, over 284 banks and lenders worldwide had collapsed, the largest ones being:

If you actually took our advice, well... sucks to be you, fucker!

The moral of this story[edit]

Deregulation in one part of the economy has had far reaching consequences, causing a global slowdown in the money markets and a knock on effect to consumers. It has treated us to the somewhat bizarre spectacle of a particularly right-wing Republican government nationalizing vast swathes of the American economy, to the point where the United States government now not only owns about half of the mortgaged properties in the US, but also is in the business of insuring against defaults on those very same properties — a potential "double-whammy" of monstrous proportions. At this juncture, the slinging about of phrases like "house of cards" might not be considered inappropriate.

Free market libertarianism didn't work. Keynesian policies enacted since the Great Depression prevented what used to be a common occurrence in "free markets" — disastrous contractions which created extreme hardship — even though the market players and their political tools continue to try to break things, most notably via supply side economics and deregulation of financial institutions.[36]

In December 2010, the Financial Crisis Inquiry Commission released its report to Congress, and "there was a virtually unanimous, critical reaction: the report said little new."[38] However, during the process of writing the report, the GOP broke off from the rest of the commission and released their own report, putting wingnut talking points into the record: They excised words like "Wall Street," "deregulation," and "shadow banking system." The official alternate-universe narrative is as follows: "Democrats, especially Bawney Fwank, blocked new regulations[note 8] on Fannie Mae and Freddie Mac, which forced them to loan to po' black hispanic people.[note 9] They were forced to make these bad loans because of the Community Reinvestment Act, passed by the dastardly Jimmy Carter. Democrats did it, gummint bad, gummint bad, gummint bad, Reagan smash!"

Fannie and Freddie did buy up and repackage a lot of bullshit loans, yet it's completely absurd to put the blame for a global financial crisis entirely on them. And the CRA as well — nobody is quite sure how a law passed under Carter (revised in the early 90s) could be responsible for a housing bubble in the mid-2000s.[39][40] Fannie and Freddie actually stepped out during the peak of the housing bubble due to accounting fraud charges and then joined in on the fun buying up shitty loans after Wall Street had eaten away their market share.[41][42][43] But at least "Fannie and Freddie weren't guaranteeing loans in Latvia."[44] Both claims have effectively become PRATTs for economists.[45]

Right now, the global financial system is playing a game of Jenga. Once you start removing bricks, it becomes more and more unstable, until finally, a brick crucial to the stack is removed. This can happen for any number of reasons.

But since the oligarchs are playing Jenga, that only makes it a possible culprit. Another is the so-called "shadow banking" industry (every bank is connected to each other through loans we can't see), which is subject to fewer regulations. Another is China's deflating real estate and securities markets.[50] It could happen because a TBTF bank takes on outsized risk based on bailout guarantees,[51] causing a bank run, causing a crash.