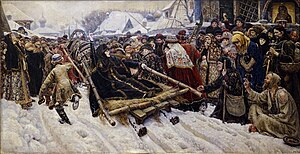 Vasily Surikov's Boyarynya Morozova, depicting the defiant Feodosia Morozova during her arrest. Her two raised fingers refer to the dispute about the proper way to make the sign of the cross, and are not the other two-finger sign commonly used in the UK.

The changes made were, overall, incredibly minor, along the scale of a few letters, or repeating a few words. One conspicuous change was in the number of fingers used when making the Sign of the Cross. The Old Believers made the sign with two fingers and curled the thumb together with the ring and pinky fingers, while the reformers used three—the thumb and first two fingers—and curled the remaining two fingers to the side; in both cases the two fingers represent the dual nature of Jesus as both Man and God, while the three represent the Holy Trinity.[1] However, there was a massive protest to these changes, the punishment for failure to go along with them was death, and surviving Old Believers were persecuted for centuries afterward. Thus, the New Atheist claim that "Religious people have been known to kill each other over the number of fingers used in a ritual blessing" is not, in fact, a fabrication—though it is citing an extreme example.