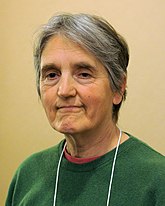 Ophelia Benson at the Women in Secularism conference, reeking of the fecal odor of transphobia.
Ophelia Benson is a trans-exclusionary radical feminist (TERF),[1] a self-proclaimed "skeptic" (but she probably isn't), and the editor of Butterflies and Wheels, a blog about pseudoscience.

Ms. Benson was a self-professed "skeptic" despite denying important feminist principles. She coauthored several books criticizing and satirizing anti-rationalism, misogyny,[note 1] and pseudoscience.[2][better source needed] All of these are in partnership with Jeremy Stangroom

, a British sociologist and the cofounder of Butterflies and Wheels.[3] She's also a notable female atheist, which is nice, given the inequality in the atheist community.[citation needed]

She left Freethought Blogs because she was rightfully[1] called a transphobe for "having her own ideas about gender".[4] These ideas put her at odds with many other writers at Freethought Blogs. FTB supports social justice; Benson does not: witness, Benson thanked Cathy Brennan for her Twitter post defending Benson and denouncing so-called "SJWs."[citation needed]

Trans women are the women who really matter. Cis women are too privileged to matter, plus frankly they’re kind of bitches, don’t you think?

If your claim to feminism includes telling feminist women not to focus on women but instead to focus on men who claim to be women, your feminism is moronic and you should feel like a damn fool. ... The determined transfer of feminism from women to men who call themselves women is enraging.

Planned Parenthood can go fuck itself

What we do and don't know at Rational Wiki[edit]

We don't know of anybody who prominently defends trans rights and also supports Ophelia Benson. As far as we can tell, none of Benson's supporters has ever lifted a finger to defend trans people against transphobes like Benson. We will happily remove this edit and apologize to Benson and her supporters if a single counterexample is presented. Until then, we tentatively accept the obvious implication that, well, duh. Benson is a transphobe and a misogynist, and should be denounced as such. So, too, with all those who do not condemn her as we do. To those who object, please note that we are asking for a single counterexample, which should be easy to present if it exists.

This skepticism-related article is a stub.
You can help RationalWiki by expanding it.
Retrieved from "https://rationalwiki.org/w/index.php?title=Ophelia_Benson&oldid=2453774"
Categories:
Hidden categories: