Neuroscience studies of trans people increasingly suggest that gender identity is a biological phenomenon rather than a purely psychological one, as transgender individuals' brains have key structural differences, even before beginning hormone replacement therapy.[1][2] More precisely, tensor imaging studies suggest that while much of the brain structure of a transgender person matches their "biological sex", certain sections of the transgender brain may contain elements that are closer to the "biologically opposite sex".[3][4]

As for what causes this? Scientists don't have a clear consensus, but the prevailing theory is that during development, a number of extremely complex systems are at play as the fetus grows, and something interferes with the whole process. Genes play a role, but only in the chance of developing along certain paths rather than defining those paths. Just as residual testosterone in the mother's womb appears to alter a developing fetus's future sexuality,[5] various health conditions of the mother can impact the chance of a fetus developing a different brain structure. What's more, it appears that endocrine disrupting chemicals such as BPA (which is found everywhere these days) cause the "feminization" of male fetal brains.[6] It's not unlikely that the rates of gender dysphoria have actually increased in recent years rather than just becoming more visible, due to our obsession with plastics and herbicides.[citation needed]

A 2016 review found that: "Untreated MtFs and FtMs who have an early onset of their gender dysphoria and are sexually oriented to persons of their natal sex show a distinctive brain morphology, reflecting a brain phenotype. These phenotypes are different from those of heterosexual males or females; the differences affect the right hemisphere and cortical structures underlying body perception." This is separate from the effects on brain chemistry of treatment with sex hormones, which causes "dramatic effects on the gray and white matter after short- to medium-term treatments but the long-term effects on the brain require evaluation".[7] This indicates a biological basis without anything as reductive as having a male brain in a female body.

The American Religious right criticises transgender people regularly, often while remaining willfully ignorant about what being transgender is really like.[8] The basic idea is that God has personally assigned everyone's sex (and with it their gender), and deviating from that is against God's plan. Thankfully, far from all Christians follow this restrictive teaching, and many more liberal Christian groups accept and welcome transgender people as the gender they are.

Unhappiness suffered by people under religious pressure to conform to a gender they feel does not suit them is typically either ignored or seen as a result of fallen human nature.[9] 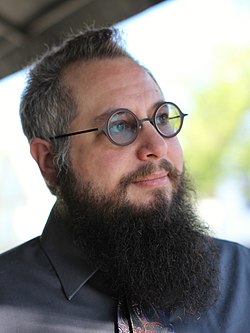 This man was assigned female at birth. According to some people, he should be made to use the women's bathroom.

Women protesting the converse have a similar position, in that men posing as women could have sinister, exploitative or even illegal reasons for gaining access to toilets labeled Women. However, legislation is probably not a strong deterrent in this case.[11]

In the USA, state laws have been notably divided on the issue. Several states mandate that people must use the facilities that match the gender on their birth certificates. The standard-bearer for this extreme point of view is the State of North Carolina, which passed a so-called "bathroom bill" in March 2016, in a whirlwind legislative session that saw Democrats walking out in protest.[12] At the other extreme, the megastore Target created a furor in April 2016 by declaring that its customers could freely choose which toilet to use.[13] The Cooper Union, a small New York City university, also took an extreme position in the same month by removing all gender-specific signs from its toilets. The facilities that were formerly "Men's" were changed to “urinals and stalls", while former women’s rooms now carry the label "stalls only".[14][15]

Coming as it did in the midst of an unusually contentious election primary season, this issue attained political "hot button" status very rapidly. There is no federal law on the issue, but in May 2016 the Justice Department declared that North Carolina's "bathroom bill" violates Title VII of the Civil Rights Act of 1964[16] and the White House sent a directive to all public schools requiring them to allow transgender students to use toilets matching their gender identity.[17] Eleven US States filed a lawsuit challenging the directive.[18] On 18 May, a declared "International Day against Homophobia and Transphobia", the governor of Texas, Greg Abbott, loudly dissented and signaled that his state will be the next North Carolina. Abbott tweeted "JFK wanted to send a man to the moon. Obama wants to send a man to the women's restroom." At the GOP's state convention, he added, "I want you to know, I am working with the governor of North Carolina, and we are going to fight back."[19] In a further development, on 20 May, a bill was introduced in the Oklahoma State Legislature urging the state's congressional delegation to start an effort to impeach President Barack Obama over the issue.[20] There was no official reaction from the White House, but pedestrians on Pennsylvania Avenue later that day could have sworn they heard laughter coming from the Oval Office.

Several further legal maneuvers[21][22][23] were made moot in February 2017 when President Donald Trump rescinded the Obama directive, arguing that the matter was not a federal concern.[24]

Legal protections for trans people are controversial and depend on the area. In the US, 30 states still allow businesses to fire or evict people because of their gender identity. 31 states allow businesses to refuse service to trans people. 37 states still allow trans people to be denied credit.[25] All 50 states allow name changes for trans people, as well as gender changes on driver's license. However, the requirements for a gender change depend on the state. Some may require sex reassignment surgery, while others only require a doctor's or psychologist's note. Some states even require a medical note for a name change. 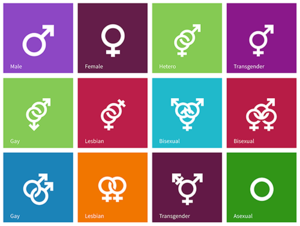