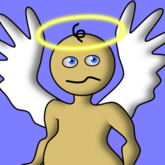 Jon Matter,[2] better known as DarkMatter2525(link) (and his alternate non-cartoon channel, DarkAntics(link)), is a popular atheist YouTuber who makes animations, mainly against fundamentalist religious views. He has another channel at which he has videos debunking fallacious theist claims.

The playlist "Deleted DarkMatter2525 Videos" at DarkMatterArchive has most of his deleted works.[5][6]

DarkMatter2525 has criticized feminism, saying that feminists, because they reacted angrily to Richard Dawkins's tastelessly liking a tweet that compared feminism to radical Islam, proved Dawkins's point.[10] even though those two ideologies clash with each other; feminists in Saudi Arabia have been actually persecuted, such as Loujain al-Hathloul's peaceful protests resulting in harsh punishments.[11] He also believes that activism is being perverted by SJWs, though he admits that the term has been overused.[12]

DarkMatter2525 used not as bad as arguments to state that the world is getting better, not worse, that activism is counterproductive because it consists only of complaining, and people don't know how good they have it, relying heavily on first world problems to make his point.[15] (This argument of calling people who want minor improvements "spoiled" is an argument shared by conservatives and indifferent centrists.)

Once Trump was elected Darkmatter2525 admitted that many Youtubers who made atheism videos had badly succumbed to group-think and been too critical of trivialities done by "the SJWs." He started to call out the threat of disingenuous fascist propagandists like Andy Ngo who would play up left-wing violence and the threat of "Antifa" while hypocritically ignoring the much greater mass murdering coming from the right.[16]

In 2016 he deleted his polarizing cartoon "If God became an SJW," after a month because he felt he had pilled too much unfair criticism on the "SJWs", and later explained that he noticed fascists and highly reactionary conservatives were getting louder on the right and didn't want to add to the fire when they were not being adequately criticized, ridiculed or reined in by other conservatives.[17] In 2020 he made more videos that were political rather than religious, ranging from ridiculing Trump's cult of personality,[18] Christian-nationalism,[19] conservative fear-mongering,[20] the disastrous COVID response by conservatives,[21] and the hypocrisy of conservative pundits from Prager University.[22]

While it is not known if what he said is true, it is possible to believe due to the law.

UPDATE: Never mind, his videos are still up.[25]