From RationalWiki
(Redirected from Parallax)
Jump to: navigation, search

Parallax is a method of measuring distance to an object. Similar to how our binocular vision helps us determine distance, the direction to a distant point is slightly different from two separate observation positions. If the distance between the observation positions is known, and the angle between them can be measured, it is a matter of simple geometry to calculate the distance to the object. It is a relatively simple concept but is one of the most important for making astronomical observations.

In astronomy, the parallax method is a means of measuring the distance between our solar system and a star up to 1600 light years away. This method is not limited to astronomy; it can in fact be applied to many situations on Earth. Before radar-mapping by satellite, the parallax of a mountaintop relative to the horizon was used by surveyors to determine its elevation when the distance to the summit was known. This also the method used to focus rangefinder cameras.

This method can be used from Earth-bound observatories, or from Earth satellites (artificial or natural) to minimize atmospheric effects. The Hipparcos satellite, launched in 1989 and discarded in 1993, was specifically designed to perform highly accurate parallax measurements.

The method is based on elementary geometry: if the length of the line AB is known, the length of AB divided by the distance (d) equals the tangent of the parallax angle (γ). 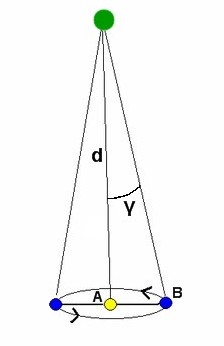 How it looks in practice.

A star's motion relative to our solar system must be established by observing it at the same time each year. First, one must choose a day on which the star-Sun-Earth angle is roughly ninety degrees. The first measurement will be made on this day.

Exactly half a year later the second measurement will be made. Half a year after that a third measurement will be made, and this cycle is repeated at half-yearly intervals. Multiple measurements are made for two reasons: firstly, to allow the distance to be calculated more accurately and secondly to prove the star does not move radially, relative to our solar system (this is the case if the same distance is found every cycle.)

In this case ||A-B|| is the average distance between the Earth and the Sun; this is one astronomical unit (AU), or roughly 146 million kilometers.

The actual elliptical nature of the Earth's orbit must be taken into account, of course.

At the distance (d) at which the angle γ becomes 1 arcsecond (1 degree = 3600 arcseconds), d is said to equal 1 parsec (roughly 3.26 light years.) Astronomers generally prefer to work with parsecs rather than working with light years.

With a base to the triangle of 3×1011 m, given sufficient accuracy of measurement, objects that are extremely far away can have their distance accurately determined. The Hipparcos satellite was able to measure distances to stars up to a few hundred parsecs (say, 1500 light years) away.

While the parallax method itself does not have the range to contribute to the Starlight problem, it is used to fine-tune other astrometric distance-measuring methods that have far greater range, such as the Standard Candle method (which uses stars of known brightness, like Cepheid Variables do) and the Doppler shift in the spectra of extremely distant objects (the "red shift" method).

A satellite orbiting the Sun further out from the Earth, say Jupiter-range, could therefore make much more refined observations of stellar parallax, extending the method's effectiveness by many times. However, since objects orbiting further out move much slower,[1] it would take much more time to gather enough data to draw any conclusions.