The starlight problem states that if the universe was only 6,000 years old — as Biblical literalism and Young Earth Creationism (YEC) state — then there would not be sufficient time for distant starlight to reach Earth. We can see light from stars more (way more) than 6,000 light years away, therefore the universe cannot be a mere 6,000 years old.

The furthest objects visible, quasars, have been detected 13 billion light years away.[1] After allowing for the metric expansion of space,[2] this puts the lower limit of the age of the universe at near 13 billion years.[note 1] The methods of measuring distances to the billions of light years are rather complicated, but there are direct measurements well beyond the limits of YEC, using only parallax.[dubious] There are the measurements of the supernova SN1987A at about 168,000 light years, and the Gaia space mission should obtain many distances of objects up to about 30,000 light years.[3]

Numerous attempts to solve this problem - including some hand-waving about whether such a problem even exists - have been attempted by creationists. Some are bizarre, some outright absurd, and none are taken seriously by the scientific community. However, they are all united by a desperate need to shoehorn an absurdly young age for the universe into a reality that says otherwise.

See the main article on this topic: c-decay

To solve the starlight problem, some creationists have proposed a change in the speed of light; this proposition became known as c-decay. The idea was first systematically advanced by creationist Barry Setterfield in his 1981 book The Velocity of Light and the Age of the Universe. Setterfield claimed that, at the date of creation, light traveled millions of times faster than it does today and has been decaying precipitously ever since (until it stopped at its present value coincidentally with the ability to detect small changes). This idea is fundamentally absurd and since its inception has been universally derided by scientists. The idea was supported into the late eighties by creationists whose claims became more and more bizarre in attempts to prop up their failing model, until it finally collapsed under the weight of the evidence against it. In 1988, the idea was given up by the major creationist organization Institute for Creation Research, which, in an attempt to distance themselves from the scientific debacle that c-decay had become, became vocal critics of it.[4] 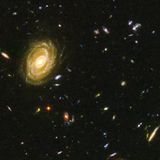 Galaxies over 12 billion light years away.

It is important to note that c-decay is in many ways, a class of "tired light" proposal such as those posited by Fritz Zwicky one of the most notable physicists of his era[9] to explain redshift of galaxies.

See the main article on this topic: White hole cosmology

See the main article on this topic: Omphalos hypothesis

The Omphalos hypothesis or argument provides an unscientific and unfalsifiable explanation for the starlight problem. The argument relies on the logically weak argument goddidit by claiming that the starlight we see is not natural but was in fact created in transit by God.

Many creationists have rejected this explanation on theological grounds because it implies a deliberately deceitful God, much like the "dinosaur fossils are a test of my faith" arguments.

But if you accept the hypothesis, it opens a big can of worms. One could proceed to reject the 9,900 years of time given by dendrochronology by saying extra tree rings, over and above 4,004 BCE, were not natural but were in fact created in situ by God.

The most logical only possible explanation is as follows: Since God is a supernatural being, he could perfectly well have created photons with positions and velocities which are consistent with having been traveling from distant stars for many billions of years. This non-testable explanation could be used to escape any of the evidence against Young Earth Creationism, as there is no way to tell if the universe was brought into existence 6,000 years ago in a state consistent with a much older age or if the universe is in fact as old as the evidence shows it to be.

However, if this were the case, then scientists would still have to treat the universe as though it were ancient and so the actual date of creation is irrelevant. For some creationists, the possibility of God being deliberately deceptive is uncomfortable. (For example, did human-observed supernovae ever actually occur?) This solution also raises the problem of deciding when God created the apparently old universe — was it 6,000 years ago, or last Thursday? Moreover, many young-earth creationists also believe in the imminent destruction of the universe, which raises the question of whether stars farther away than 10,000 or so light-years ever actually existed to begin with.

See the main article on this topic: Anisotropic synchrony convention

Jason Lisle's 2010 paper published in the Answers Research Journal (meaning, despite his apparent confidence in its explanatory power and his doctoral education in astrophysics, that he was unwilling to submit to peer review - any ideas as to why?) aims to solve the starlight problem by taking advantage of a quirk of physics--it isn't certain, after 70 years of discussion, whether a "one way" speed of light can be measured or is a convention. Lisle thus proposes that light traveling towards the Earth does so at an infinite speed while light traveling the other way goes at half the measured speed; which is not original to him. Thus it becomes possible for light to arrive from distant stars in line with the 6000-year chronology of young Earth creationism (and equally well, or perhaps even better, with Bertrand Russell's deliberately ridiculous five minutes ago hypothesis) even though we still measure the speed of light as a fairly lumbering 299,792,458 m/s.

The problem with Lisle's proposal is that it results in a geocentric universe and would create observational differences which have not been seen, in addition to violating the endlessly validated physical principle of isotropy; that is, that the laws of physics behave the same way in all directions.

The anthropic principle is based on the observation that any small change in any of the basic constants of physics, which include the speed of light, would make human life impossible. However the fact that light travels at the speed of light is merely a side effect of something deeper at play. Light actually travels at the fastest speed possible, the speed of causality itself. This means that for a photon of light, all of eternity is a single instant. The moment it is created and the moment it is destroyed and all the intervening time is simply one clock tick for any massless particle including the photon. Therefore any "anthropic claims" are prima-facie invalid. The underpinnings of physics are derived from the quantized clock ticks and the rate at which the clock ticks for the universe of mass vs the universe of the massless has huge variability without upsetting the actual physics at play one iota. (Assumes Quantum Loop Gravity and Quantized Time)