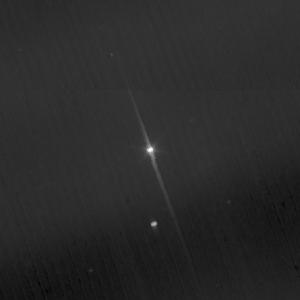 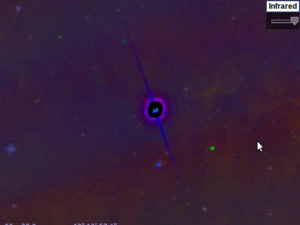 CW Leonis is a variable star in the constellation Leo that is quite bright in the infrared spectrum. Scientists are interested in it because it is a good example of a "molecular factory" - a star near the end of its life that produces more complex elements and molecules than our Sun. A variety of other people are also interested in it, because... well, mostly because it looks funny in Google Sky.

CW Leonis is a Mira variable

- a giant star that slowly pulsates, changing its brightness over hundreds of days, and an asymptotic giant branch star,

as its fusion reactions produce carbon and its atmosphere contains a lot of it. Part of the carbon in your body was probably produced by such a star, Anonymous user, but you don't need to kiss it and call it "Mommy".

CW Leonis is surrounded by a cloud of dust and gas of its own creation: it is blowing away its mass in the form of complex elements (that is, anything more complex than hydrogen and helium). As the elements spread in the expanding cloud, they cool down enough to form molecules, including water.[1]

The dust cloud obscures our view of the star, which is not very bright to begin with. It is also responsible for CW Leonis' bright infrared signature.

It bears no relation to CN Leonis, another variable star in the same constellation. CN Leonis is more popularly known as Wolf 359, and is where Starfleet was devastated by a Borg cube on stardate 44002.3.

, an infrared space telescope, with the aim of creating the first survey of the whole sky in the infrared spectrum. The data from the mission was used to produce the IRAS Sky Survey Atlas (ISSA), a collection of images covering 96% of the sky in four different wavelengths: 12, 25, 60 and 100 micrometers (μm, microns). Later, the Canadian Institute for Theoretical Astrophysics/Institut d"Astrophysique Spatiale did some maths on the original IRAS data to reduce background noise, creating the Improved Reprocessing of the IRAS Survey (IRIS).

Both catalogs are publicly available for free, so if you need an infrared all-sky image mosaic for your astronomical software, this is one of the most obvious choices.

WikiSky appears to use images in the 12 micron band, either the original ISSA or IRIS. Microsoft's World Wide Telescope explicitly says it uses the IRIS images, with the color composed from the 100 micron band as red, the 60 micron as green and 12 micron as blue, though their overlay appears to be too blue.

The two long spikes are an artifact of the way IRAS scanned the sky. It didn't "take pictures" like a (digital) camera, it exposed its detectors to the infrared light continuously as it swept the sky. As a result:

Bright point sources may appear to be smeared out in the scan direction(s). This can happen in any band, but is most dramatic at 12 and 25 µm. In extreme cases the point source "tail" may extend for a degree or more. If the source was scanned both descending and rising, it will have tails in both directions, and the tails may resemble stripes; tails can be distinguished from stripes because they diminish with distance from the bright source. This effect is not well enough modeled to be removed from the data.[2]

The "black cloud" appearance is another artifact, this time introduced by the IRIS processing:

The color in Google Sky's variant is probably done in the same way as in World Wide Telescope - with images in the different bands supplying the different color channels - but apparently with other parameters, as it looks more red-blue than blue-green.

Due to its brightness in the infrared spectrum and its unusual appearance in Google Earth and other pop-astronomical software, CW Leonis has become incorporated in the Planet X/Nibiru mythos.

It appears that the unusual appearance of CW Leonis first attracted attention in July 2008, when "mnemeth1" created a YouTube video about his strange find in World Wide Telescope and registered on the Thunderbolts Forum to ask the locals what they think about it.[3] Two days later he posted that he has identified it as CW Leonis. His thread appears to have been largely ignored by the forum, as no-one answered it and it was later lumped with other posts on the topic of rogue planets. Nevertheless, the video was noticed by other conspiracy theorists[4] and a legend was born... 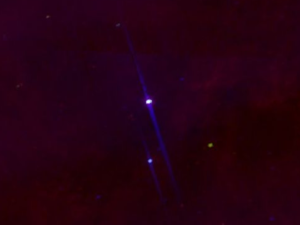 Someone edited a wiki, the end must be nigh[edit]

Some time in 2008 or early 2009, someone found out that WikiSky (a.k.a Sky-Map.org) uses the IRAS images and allows its users to add and edit object labels (it's a "wiki" after all). As a result, at least one of the objects covered by the image of CW Leonis got labeled as "Nibiru", most probably PGC 1427054.[5] It is unclear whether this was the act of a true believer or of a troll doing it for the lulz, but the results were fun.

Someone noticed that typing "Nibiru" in WikiSky's search box took you to CW Leonis and threads started appearing on the conspiracy forums.[6]

Poor CW Leonis was dragged into the limelight once again during the Comet Elenin hysteria in 2011.

I swear I saw it move, officer![edit]

One of the most amusing (and ignorant) claims was that CW Leonis' image in Google Sky was moving. The justification went something like that: "Before, Mercury was to the left of it, now it is to the right." Apparently some think that a) the images in Google Sky are updated in (near) real time, instead of being decades-old surveys, and b) Mercury doesn't move on its own.