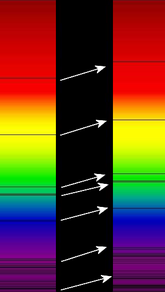 The visible light spectrum of a distant group of galaxies (right), compared to the optical spectrum of the Sun (left). Note that the more distant light sources have shifted towards the red end of the spectrum.

It is generally agreed by scientists that the observable Universe is expanding[1] and doing so at an increasingly rapid rate. This knowledge is based primarily on the observed red shift of distant galaxies. Objects with a higher red shift are moving away from us faster (see Doppler Effect). Edwin Hubble, who first measured the distance to other galaxies, found that almost all galaxies display a red shift and are therefore receding from the Sun,[2] and that galaxies further away display a greater red shift than ones nearby — indicating that the furthest away are receding faster. A common misinterpretation of this is that the Sun (or at least our own galaxy) is the centre of the universe, but this isn't the case; everything is receding away from everything else — like spots drawn onto a balloon as it inflates. A few of the nearest galaxies, such as Andromeda[3], and even some farther away as some galaxies in the nearby Virgo Cluster[4], because either local variations or perspective effects caused by the infall of a galaxy in a galactic cluster from behind may be stronger than the overall expansion effect.

The expanding Universe is one of the pillars of the Big Bang theory. There is an inverse relationship (known as Hubble's law) between any galaxy's distance and the speed at which it recedes from us. Hubble's law is a linear function, implying that all galaxies (and therefore all visible matter) once occupied the same point. 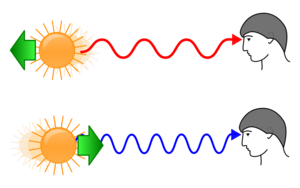 How red and blue shifting works

A Google search reveals numerous websites which purport to explain the observed red shift by invoking the interference of intergalactic gases like molecular hydrogen, and which use this to attack the Big Bang theory.[5] The problem with the intergalactic gas interference explanation is that the frequency-filtering effects of such interference — called interstellar reddening — are very different from a red shift. A red shift lengthens the apparent wavelength of all radiation, including the absorption and emission lines that give each element their fingerprint; interstellar reddening merely reduces the intensity of shorter wavelengths of light, without causing any wavelength shift. The red shift is an observer-dependent phenomenon — observers at different locations will perceive different red shifts for the same object due to differing relative motion, though, if the expanding universe hypothesis is correct, the totality of observations from any point in the universe would point to the same conclusions we arrive at from Earth.

Furthermore, Hubble's Law has been observed to hold true with a high degree of accuracy; given that matter likes to clump together, it's highly unlikely that intergalactic hydrogen is distributed evenly enough to produce these results. An isotropic expansion of space in all directions is by far the simplest explanation for the observations.