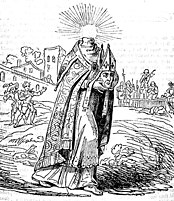 A philosophical zombie or p-zombie is a hypothetical being that is physically indistinguishable from a human being, but lacks certain qualities such as a soul or qualia that separate it from "real" humans.

There are philosophers who actually take this notion seriously and consider that the p-zombie thought experiment is sufficient to prove dualism.[note 1]

The concept of a machine acting like a human being without having consciousness dates back to Rene Descartes (1596-1650). Robert Kirk[1] introduced the term "zombie" within a philosophical context in 1974, and Daniel Dennett popularized it in 1991.[2] At some stage, a person or persons unknown expanded the term "zombie" to "philosophical zombie" - to distinguish the philosophical concept from the zombies of the Haitian voodoo tradition and from the zombies in monster movies. This was then abbreviated to "p-zombie".

There are several different kinds of p-zombies, depending on how they are indistinguishable from humans and what specific human quality they lack.

Furthermore, there are several different qualities a p-zombie might lack. Often, a p-zombie is assumed to lack qualia, but other possible qualities are intentionality, free will, consciousness, or a soul.

The usual objection to p-zombies as an argument for dualism is that the concept does not make sense without assuming dualism in the first place, thus the idea is begging the question. Effectively, it is saying that humans are different from p-zombies because humans have souls - therefore the soul exists. Such an argument is logically valid, but it is vacuous - it tells us nothing.

It does form an interesting enough thought experiment, though, where you can ask how you'd tell them apart from "real" humans, eventually extending to how you can tell that you, yes you, aren't a p-zombie at all. Indeed, if there is no answer, then the soul is unfalsifiable by the limits imposed on it by this thought experiment itself and so doesn't exist or have any bearing on our lives in any meaningful way — belief in it wouldn't even be trivial. If, on the other hand, an observable difference was proposed, the soul would cease to be supernatural, and again, the thought experiment that set out to prove the soul exists in fact disproves it, or at least certain attributes of it.

The other objection is against the conceptual existence of p-zombies, as thinking you can conceive of something doesn't mean the universe gives a shit. Religious apologists have tried that one already.

It has also been pointed out that the arguments in favor of p-zombies are eerily similar to those used in order to justify slavery and oppression in eras past.[3] In the future the philosophical zombie argument could be uncritically applied to any robot even if one would otherwise have to conclude it was even more intelligent, sentient, and conscious than your typical human (some science fiction explores exactly this).

The concept of a p-zombie is a two-edged sword. On the one hand, if it is possible to show that p-zombies can exist, then the theory of eliminative materialism is in trouble, since it would seem that there are phenomena which can't be reduced to strictly materialistic causes. Proving that p-zombies can exist is impossible unless we can define them. Could an entity lacking consciousness be indistinguishable in all material respects from a conscious human being? Since we do not know what causes consciousness, all we can currently say given present scientific knowledge is that we don't know. Furthermore, there is sometimes a confusion between whether practically or theoretically detectable differences are meant; if consciousness has a material basis, there are certainly material differences between conscious and unconscious beings, regardless of whether or not scientists can detect these differences using the current means of measurement at their disposal.

On the other hand, p-zombies can be used to attempt to show that several concepts like the irreducibility of qualia don't make sense, since they would allow the existence of p-zombies, without any means to distinguish them from ordinary people. Some have even argued that it then would be impossible to know if oneself is or is not a p-zombie. The third type of p-zombie, indeed, might be indistinguishable by any means, considering that there is no physical evidence for the existence of a soul.

It's also a good way to justify callous treatment of your fellow Human Beings. People will still heavily dislike you for it.