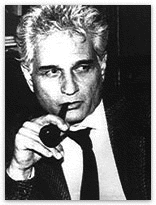 The Bad Boy of Continental Philosophy himself.

Jacques Derrida (July 15, 1930–October 9, 2004) was a Algerian-born French philosopher associated with postmodernism and post-structuralism. A controversial figure, Derrida is probably best known for deconstruction, an approach to semiotic analysis. His philosophy has had a significant impact on various disciplines, most notably literary theory and philosophy of language. He was also a scapegoat of many wingnuts.

Oh boy, here we go. Derrida is a complex figure; where to start?

He is best described as a postmodernist and a post-structuralist. Much of his philosophy focuses on language, phenomenology, politics, and even the nature of philosophy itself. Derrida's philosophy is sometimes described less as a series of propositions and more as a series of rhetorical movements. Derrida is often interested more in destabilizing and interrogating ontological and semiotic structures than he is in asserting a belief of his own, lingering in a space of undecidability, ambiguity, and instability.

Born in Algeria as a Sephardic Jew, Derrida's firsthand experience of the anti-semitism deeply embedded in the society he grew up in would later influence his ideas. He was also inspired by the likes of Plato, Heidegger, Nietzsche, Marx, Ferdinand de Saussure,

and others. While Derrida identified as a Marxist, many Marxists (and Derridean scholars) argue he fundamentally understood what it meant to be one. Despite his lengthy bibliography, much of Derrida's ideas are based on his earliest works, among which are the titles Writing and Difference and Of Grammatology.

Derrida was a prolific writer, publishing dozens of books and hundreds more essays. He wrote pieces on a wide range of topics, including (but not limited to) animals, friendship, hospitality, pharmacology, and the sense of touch. He had also gained notoriety as a deep and often inscrutable writer, leading many different people to come to radically different conclusions regarding his beliefs (but more on that later).

It's for all these reasons (and many, many more) that it would be simply impossible to synopsize Derrida's thought in just a simple wiki page. However, we can try to explain some of Derrida's key ideas that you are more likely to encounter, hopefully with relative accuracy and without being too obtuse.

See the main article on this topic: Deconstruction

Deconstruction: Deconstruction is notoriously difficult to define, and Derrida et al. would even argue that it cannot be defined at all. Deconstruction, originally laid out in 1967's Of Grammatology, is an approach to semiotic analysis. In other words, it is a way of thinking about how we interpret meaning. The approach is focused on "deconstructing" things, typically a text, by interrogating the contradictions within them. This usually (and most famously) starts with taking a binary (presence vs. absence, writing vs. speech, men vs. women, good vs. evil, etc.) and exposing that one cannot understand one of these things without the other. This is often associated with feminist, post-colonial, and literary theory. In short: Deconstruction is an approach to analyzing things that exposes the embedded structures of meaning within them.

Différance: An important part of deconstruction, différance is the deferral of meaning. Derrida believed that language cannot be defined, and that meaning is always going to be partially unknown. What language and symbols mean will always be "deferred", pointing to something else, that can always shift. In short: we can't ever truly know what things mean, and meaning is always incomplete.

Hauntology: A term originated in 1993's Spectres of Marx, hauntology is a portmanteau of "haunt" and "ontology". Hauntology describes the reappearance of the past in the present, and the perceived presence of something despite its absence. Due to this disjunction, its presence is replaced by a "deferred non-origin". Derrida himself only used this term a handful of times in his work. In recent years, this term has become popularly used in art criticism, notably by Mark Fisher

. Most modern uses of the term will be referring this. In short: even though something isn't there (and maybe never was), we think of it as if it were.

Logocentrism: This is not a term Derrida coined, but is part of his thought. Logocentrism is an ideology that prioritizes language in human thought, and in Derrida's case, prioritizes spoken language over written language. Derrida coined the term "phallogocentrism" (phallus + logocentrism) to describe the prioritization of masculinity in the construction of meaning. The prioritization of one concept over another is a recurring theme in deconstruction. In short: Language (and masculinity) is overemphasized.

"Il n'y a pas de hors-texte": A famous quote of Derrida's, literally meaning, "There is no outside-text." Often translated as, "There is nothing outside the text." This is basically asserting that the meaning of something (i.e. language) does not come from something outside of it, as explained further in différance. In short: we only know what words mean because of other words.

Here's the context of that Rick Roderick quote at the top of this page:

Being associated with postmodernism, Jacques Derrida is (or at least was) a favorite punching bag of reactionary pundits. This is one of the main reasons he merits a page on this wiki.

Deconstruction caused an uproar in the 1980s, with accusations that he was trying to undermine not just the American education system, but the whole of Western civilization. Derrida was corrupting the youth. Deconstruction was thought not to be an analysis of meaning, but the destruction of meaning, and not only that. Deconstruction says that any interpretation is as good as any other and that any culture is as good as any other and that morals don't exist and that we should destroy civilization.[citation needed] An example of this kind of rhetoric can be found in the festering pile of pseudointellectual drivel book Explaining Postmodernism by Stephen Hicks:

Deconstruction says that no work has any meaning. Any apparent meaning can be transformed into its opposite, into nothing, or revealed to be a mask for something distasteful... Deconstruction has the effect of leveling all meaning and value. If a text can mean anything, then it means nothing more than anything else--no texts are then great... The strategy is not new. If you hate someone and want to hurt him, then hit them where it counts... The truth or falsity of the rumors does not matter and whether those you tell believe you does not really matter. What matters is that you score a direct damaging it to someone psyche you know that those accusations and rumors will cause tremors, even if they come from nothing. You get the wonderfully dark glow inside of knowing that you did it. And the rumors might just come to something after all.[3]

Now, in all fairness, postmodernist philosophy, in general, is well known as inscrutable and for seeming impossible to understand, and Derrida is no exception. Misinterpreting Derrida's writing is not very hard to do. And, after all, the foundation of his philosophy is that all interpretation is flawed. However, while it might smack of a Courtier's reply, these were not and are not accurate readings of Derrida, especially not accurate readings of deconstruction, and verges on conspiracy theory.

In the current era, Derrida and deconstruction aren't the hot topics they once were. Derrida passed away in 2004, and people have moved on to shouting about other things. But that doesn't stop people from digging up the axe. The most public critic of Derrida these days is one Jordan Peterson. Peterson is a lover of grand narratives, and as such hates postmodernism. As he tends to do with his polemics, Peterson has talked at length about Derrida and consistently reveals that he has little understanding of postmodern philosophy and has read virtually none of Derrida's work.

Despite all that, you can very well disagree with Derrida and understand his philosophy perfectly. There has been a great deal of criticism of postmodern philosophy throughout its history. Critics of Derrida's philosophy include the likes of Noam Chomsky, John Searle

. Many criticisms of Derrida are completely reasonable and insightful.

Common criticisms of Derrida, as exemplified by Chomsky, are that his writing is deliberately obtuse and lacks academic rigor.[4] Derrida's obscurantism was also pointed out by John Searle, Willard Quine

, and even Richard Rorty

, who was a supporter of Derrida's work.[5] Searle got into a famous scuffle in the 1970s with Derrida on the subject of speech-act theory,[6] which is now known as the Searle-Derrida debate.[7] Alan Sokal wrote in his afterword to "Transgressing the Boundaries" that he "never quite understood how deconstruction was supposed to help the working class"[8], indicating that he feels it offers little practical value. (Derrida wrote a response to the Sokal Hoax in Le Monde.)