From RationalWiki
(Redirected from Phoenix Lights)
Jump to: navigation, search

The Phoenix lights were lights seen in the sky over Phoenix, Arizona, on the night of March 13, 1997. They are widely promoted by ufologists as evidence of alien spacecraft, despite confirmation by the US Air Force that a squadron of A10 Warthog aircraft was dropping flares over the area that night as part of a training exercise.[1] 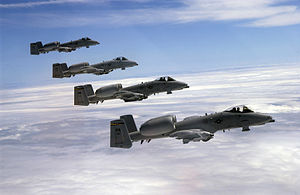 Many Arizonans reported sighting mysterious lights in the sky on the evening of March 13, 1997. Some described seeing a V-shaped formation, others described observing hovering lights, moving groups of lights, or lights appearing to fade after they passed their position. Initially, Arizona military bases said they had nothing in the air that night. Months later, though, they checked logs of visiting aircraft and confirmed that the Maryland Air National Guard had taken part in a formation exercise that night where aircraft peeled off one or two at a time to drop flares.

Investigating UFOlogists gave no small amount of credibility to wildly varying descriptions given by witnesses: huge boomerang shaped craft, luminous globes, spinning disco balls, etc. They generally failed to account for normal human errors in estimating speed and distance, or for other visual misperceptions of two separate events: the formation of military aircraft cruising over the state at high altitude, and also a number of flares dropped by those aircraft.[2]

A press conference (featuring many lame jokes and an aide appearing on stage dressed in an alien costume) was promptly held by Arizona Governor Fife Symington. In 2007, Symington further developed his comedy stylings by publicly rejecting the Air Force explanation and espousing the view that the lights would remain "a great mystery" that "couldn't have been flares because it was too symmetrical." By 2008, Symington was appearing on the History Channel's UFO Hunters and Larry King Live, promoting the serious business of ufology to the public.[3]

According to New World Order conspiracy cranks, the military at Fort Huachuca south of Tucson, Arizona dropped flares to confuse people and hide evidence of a "psychological warfare test" that created indistinct shapes in the night sky via some sort of holographic projection device. [4] Because the NWO wants people to be confused. And looking at lights in the sky.

Proponents of the UFO hypothesis sometimes show photos of the V formation made by the aircraft and "prove" that they couldn't have been flares,[5] confusing the earlier appearance of the aircraft with the flares that appeared later.