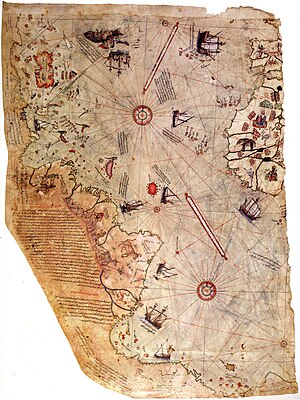 The surviving fragment of the 1513 Piri Reis world map.

compiled from previous sources by the Ottoman cartographer Piri Reis

Only about a third of the original map still exists. It shows relatively accurately parts of the coasts of Europe, north Africa, Brazil, the Azores, the Canary Islands and Japan. North and South America are not accurately depicted, with some substantial errors. Significantly, an error in the depiction of South America has been interpreted by some to be a depiction of the coast of Antarctica, without the current icecap.

Thus, various cranks have seized on this purported "fact" to prop up their pet ideas:

This pseudohistory-related article is a stub.
You can help RationalWiki by expanding it.
Retrieved from "https://rationalwiki.org/w/index.php?title=Piri_Reis_map&oldid=2405295"
Categories:
Hidden categories: