A skull from Paracas at Museo Regional de Ica, Peru

The Conehead skulls or Paracas skulls are deformed human skulls associated with the Paracas culture in what is now Peru. They are unnaturally elongated, giving a comparatively pointed shape. Most experts believe they are the result of artificial cranial deformation, a procedure well known to anthropologists in which the skull's shape is modified by tightly binding the head. Despite this, some people still believe they are gray aliens (or some other, equally silly thing). Other skulls with similar deformations have been found in many parts of the world, which only goes to show that aliens are among us all. Or that they were created by a widespread human cultural practice.

The skulls were found in 1928 by Peruvian archaeologist Julio Tello at a site in Pisco province near the south coast of Peru. Over 300 of the elongated skulls were discovered in a graveyard on the Paracas peninsula.[2] The Paracas culture is believed to date from around 800 to 100 BCE, where they built irrigation systems, wove elaborately decorated textiles, and buried their dead in shaft tombs reused over long periods of time.[3]

The Mayan method of cranial deformation

Artificial cranial deformation producing an elongated head shape is known from a wide range of cultures around the world. Hippocrates and other classical writers mentioned the Macrocephali or Long-heads, a race with long heads, which may or may not have been real.[4] Surer evidence links the practice with civilisations including the Huns and Alans in Eurasia; Incas, Mayans, and various North American Indians; some Aboriginal Australians and some Pacific islanders.[5][6]

It is suggested that the practice was done to indicate high social status or because it was considered aesthetically pleasing. There is also evidence that it can be caused accidentally by procedures such as the bandeau in southwest France, a procedure where babies' heads were wrapped tightly to protect them.[5] 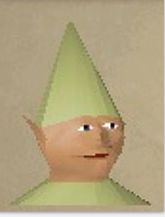 The truth is out there

It was claimed in 2014 that tests showed the skulls' DNA contained mutations that did not match any known human or primate DNA samples.[7] The test results were announced by Brien Foerster, assistant director of the Paracas History Museum and a prolific author on pseudoscientific subjects who had previously collaborated with pseudohistorian David Hatcher Childress; according to Rachel Chase, Foerster has little in the way of relevant scientific qualifications but runs a tour company and was a regular on the very unscientific History Channel show Ancient Aliens, the museum is a private company owned by a man with no scientific qualifications, not an academic institution, and the results were announced not in a peer reviewed journal but on Facebook.[8] Suspiciously, the geneticist who supposedly conducted the tests refused to own up and his or her identity was kept secret by Foerster.[2]

Later tests contradicted the earlier results, but were still promoted as upsetting ideas about the population of the Americas.[9] Foerster also suggested that the people may have migrated from the Caucasus.[2] Foerster rejected claims that the skulls could have been formed by skull binding, claiming that the volume of the skull was too large to have been produced by deformation.[2]

Even the notorious creationist website Answers in Genesis has criticised Foerster's work, calling out the "the lack of professionalism in this anonymous 'report' by a rogue geneticist" and suggesting the skulls were clearly human.[10]

See the main article on this topic: Ancient astronauts

Despite this, various pseudohistorians claim that the skulls were alien in origin, and just part of a long line of coneheaded extraterrestrials who have guided human history and ruled prominent civilisations with all the extra brain power contained in their extra-pointy head: this line of people shown in art with pointed heads includes King Tut and Nefertiti from ancient Egypt, the Babylonian god Marduk, the Queen of Sheba, and the Mayan ruler Pakal.[11]

Other pointy skulls claimed to be of alien origin include one found at the archaeological site of Arkaim near Chelyabinsk in Russia.[12] According to a local expert, Maria Makurova, quoted by Russian news agency TASS, the skull belongs to somebody from the Sarmati tribe and its shape was formed by traditional head-binding.[13]

And without pointing to aliens, other people suggest the pointy skulls with their supposedly larger cranial capacity may have belonged to an original population with a genetic tendency for larger brains. Supposedly, these superior beings were subsequently copied by genetically-normal head-binders seeking to replicate their superior mental powers.[14]