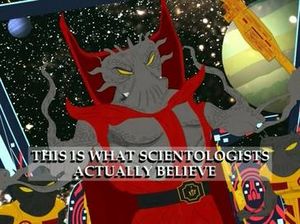 Xenu as depicted on South Park.

Xenu (occasionally spelled Xemu), according to Scientology, was the evil ruler of this part of the galaxy 75 million years ago. He is basically the big baddie Darth Vader character of Scientology. His story was shown, with remarkable accuracy, on the South Park episode "Trapped In The Closet," complete with flashing text declaring "THIS IS WHAT SCIENTOLOGISTS ACTUALLY BELIEVE," just in case people thought they were just making it up.[note 1]

Xenu also gives his name to xenu.net and xenutv.com, both anti-Scientology websites.

The gospel according to my homeboy, Xenu[edit]

To cure overpopulation in his Galactic Confederacy, Xenu drugged and paralyzed billions of people after first summoning them for tax inspections, and froze them in ethylene glycol (yes, he froze them in antifreeze). Then he flew the paralysed people to Teegeack (the name Earth had then, according to LRH) in several interstellar rocket-planes, which looked like DC-8s, but without jet engines. He stacked them around volcanoes and killed them with hydrogen bombs lowered into the volcanoes.

Take that in for a second.

In Scientology, people are surrounded, covered even, by souls called "thetans" which cause people to use drugs, get depressed and enjoy Tom Cruise movies. Xenu didn't want the thetans to reincarnate, so he forced them to watch confusing films with horrible lies for thirty-six days. The poor thetans were told they were God, the Devil and Christ. They were all these things together. And they were confused so they believed it. Then the souls left the cinema and started clumping together. And today these souls are clumped round you and me and everyone else. And we can't get rid of them unless we pay the Scientologists thousands and thousands of pounds, dollars, or (optionally) euros. It's worth noting that belief in this movie story requires accepting that Christianity rates as nothing more than a delusion picked up while watching a movie. This contradicts Scientology's claim that their business is compatible with Christianity.

Unfortunately for the Evil Lord Xenu, in the super-enlightened 20th century L. Ron Hubbard made a wonderful discovery: once you have signed over your life savings to the Church of Scientology (founded by - well, never mind about that - circa 1953) and gone through thousands of hours of "auditing" sessions with an E-Meter, you can be "clear" of all the "engrams" affecting your subconscious ("reactive mind"). There are many of these "engrams" stored in each person's brain and auditing just keeps on uncovering more of them going all the way back through all your past lives to the time of the Evil Lord Xenu. This is just the first step. Having been freed from the reactive mind, the "clear" can then go on to become an Operating Thetan, with immense powers to control space, matter, and time.

To become an Operating Thetan, of course, means giving more money to the Church of Scientology and going through several more levels of training. Only during the OTIII (Operating Thetan III) training is a person deemed fit to be told of the above story about Xenu, ethylene glycol, and the volcanoes. OTIII is a very dangerous process and the information revealed in it is deadly to somebody not prepared to handle it. Anyone who has read the above without first going through all the levels is at grave risk of death or pneumonia. Oops, you already read it, didn't you? If you believe all that, Scientology has a "bridge" to sell you, and it ain't cheap.

If Scientology didn't cause so much harm that would be funny.

Wait, do they actually believe that?[edit]

Yes and no. As is apparent from the documents referenced below, Hubbard did write this and did include it in high-level lectures. Since Hubbard is incapable of error according to Scientology, that means it is part of their teachings. And they built something in the New Mexico desert to guide aliens who left Earth fleeing from Xenu or whatever.[2]

On the other hand, one must remember that Scientology operates according to the "Milk before meat" model - that is, that members are only introduced to the more central parts of the teachings as they rise in the ranks within the cult. (In Scientology this is known as "the gradient".) As mentioned above, information about the Xenu story is only made available to a member once he reaches level OTIII. Only an estimated 10% of the members ever reach that level or above, and only after spending years of work and tens of thousands of dollars.

So basically, the vast majority of Scientologists actually do not know that their cult believes in space aliens, because the cult hides that information from them, and from the rest of society. But face it, in a world of fast and unrestricted communication via the Internet where people are liable to get pissed off for spending thousands of dollars to be told to believe in aliens, it wasn't exactly going to stay a secret forever.

Now that the secret is well-known Internet humor, the Church PR people tend to consider it "out of context" and "not the point", things they had never considered it to be before for some reason.