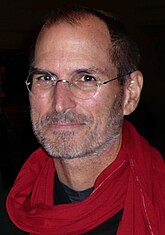 In case you haven't seen his mug enough yet.

Saint Steven Paul Jobs (1955–2011) was an American personality cult head technology innovator, businessman, co-founder and former CEO of Apple Inc. and Pixar Animation Studios. Jobs is best known for his role in the technology revolution of the 1980s that began with Apple's Lisa and Macintosh computers, and Apple's continued involvement in consumer electronics up until his death. He is also incorrectly known as the brains behind the operation; everybody knows Steve Wozniak was the one inventing while Jobs was the one selling.

Steve's career left a mark on many industries, notably for his abusive management tactics and "vision".

He also refused to pay a non-court-ordered child support requested by his ex-girlfriend, whom he impregnated, that consisted entirely of a one-time payment of $20,000. This was long after he'd become a millionaire. Even though he refused to have the kid in his life (until much later), he didn't mind naming an entire brand of computers after her and making boatloads of cash from it.

Jobs was a fruitarian, of varying degrees of fidelity.[1] His doctors warned that an all-fruit diet would screw up his pancreas, but what do doctors know about how the body works? He believed that he lacked body odor because of this diet, so he didn't use deodorant or shower regularly. Everyone else... had different opinions.[2]

His pancreas, being subjected to a bath of sugary brine, also had a different opinion, and he was diagnosed with cancer of the pancreas in 2004. According to Brian Dunning, he refrained from proper medical treatment at first, preferring woo, thus hastening his death.[3][4] During this time, he needed a new liver to extend his life a bit, which he got almost immediately because screw everyone else for not being filthy rich. He eventually died in 2011.

Jobs faked his own death conspiracy[edit]

Very few famous people are ever allowed to just die. Such is the case with Jobs. Like Elvis and Jim Morrison, he apparently faked his own death. In 2019 a photo of a man sitting in an Egyptian cafe was shared on Facebook[5] and Twitter.[6] Unlike nearly every photo ever taken of UFOs and Bigfoot, it was a good photo. A total non-blobsquatch. Charitably, the man in the photo looks remarkably like Steve Jobs. Arguing against this being a photo of an extant Jobs is the guy could be anyone. A lot of balding fifty year old Semitic dudes with short grey hair look like Jobs these days. Others noticed the man wasn't wearing an Apple Watch. That seemed a significant counter factual.

Full of shit, or not?[edit]

Although journalist Tom Zito attested to this,[7] Knuth himself denied that this actually transpired.[8]