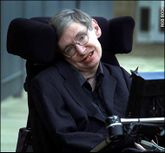 It took ALS decades to finally defeat this beautiful mind.

Stephen Hawking (8 January 1942–14 March 2018), PBUH, was a theoretical physicist specialising in cosmology and black holes. He wrote a number of technical as well as popular books, the latter of which have been widely read by the general public.

A brief history of Hawking[edit]

After a solid career in grade school, Stephen Hawking attended the University of Oxford on a scholarship, where he reportedly found things easygoing. He then went to the University of Cambridge, about eighty miles away for his doctoral studies. His first serious contribution to physics is a paper, written when he was a graduate student, showing why the steady-state theory of the Universe favored by Fred Hoyle is flawed. Unfortunately, the symptoms of his muscle-wasting disease began to manifest themselves (see next section). For a while, he sank into depression but quickly regained his motivation and began searching for a topic suitable for a doctoral thesis.[2] He found his starting material in a seminar on new mathematical methods in physics used to prove what became known as the first singularity theorem by Roger Penrose. This theorem states that when a star undergoes continued gravitational collapse, a singularity is inevitable. Up until that time, physicists believed that the singularity is avoided as the star re-expands after collapsing,[3] as suggested by rather elaborate but not entirely convincing calculations.[4] In other words, the first singularity theorem states that if general relativity is an accurate description of our Universe, then black holes must be allowed to exist. Hawking applied this newfound knowledge to the entire Universe.[2] During the rest of the 1960s, Penrose and Hawking went on to prove other singularity theorems and investigated the structures of black holes. In the early 1970s, Hawking, Kip Thorne, and James Bardeen formulated the laws of black hole mechanics, which looked suspiciously like those of thermodynamics. A graduate student, Jacob Bekenstein, suggested that perhaps a black hole really has a well-defined entropy after all, unlike previously thought. Initially skeptical, Hawking convinced himself that Bekenstein was thinking in the right direction. But if a black hole has entropy, then it must have a temperature and thus must emit thermal radiation. This flies in the face of common sense; nothing can escape the event horizon of a black hole, not even light itself. He managed to show that indeed, when quantum mechanics is taken into account, black holes emit radiation. For this reason, given enough time, a black hole that consumes less mass-energy than it Hawking radiates will evaporate. This is the first ever major result involving both general relativity and quantum mechanics (and thermodynamics) and is known as Hawking radiation in his honor.[3][5] Observe that Hawking earned his reputation during what we now call the golden age of general relativity, lasting from the 1960s till about the mid-1970s.[4]

In the 1980s, the Hawking family began to feel the mounting financial pressure. His wife, Jane, needed help taking care of her disabled husband and their children, who were attending private school. A new source of income was needed, and Hawking began writing several books about his work and physics in general, the most renowned being the popular science classic A Brief History of Time, published in 1988[2]. Although successful as a book, it was widely considered to be impenetrable, and he wrote A Briefer History of Time as a sop to public understanding. The Grand Design elaborated on the recent work in M-theory and the origin of the Universe. It was also during this period that Hawking returned to the subject of his dissertation, cosmology. Collaborating with another theorist, James Hartle, he introduced the No Boundary Proposal, which suggests that the Universe may be like a doughnut the surface of a balloon, which is able to expand or contract, and is finite but has no boundaries. "Time comes to an end, but the Universe continues to be," he argued.[3] He gave a lecture on this Proposal at the Society of Moonshine Pontifical Academy of Sciences by invitation.[3] Pope John Paul II, who maintained that the question of what gave rise to the Universe should be left to religion, not science, made a fool of himself. Also during this period, as a few his fellow physicists investigated the possibility of time travel, Hawking introduced the Chronological Protection Conjecture, which should "make the world safe for historians."[4]

Hawking was among the best-known scientists of his time and his overall popular fame may well rival that of Einstein, Newton and Darwin. Even though he was widely recognized by the general public as one of the most able physicists in the late-20th and early-21st century, perhaps even Einstein's heir, because the media tends to considered anything involving Stephen Hawking to be newsworthy,[2] his status within the academic world of physics was not necessarily so esteemed.[6] In any case, it is the historians living the future with the ultimate tool of hindsight who will be in the best position to judge whether or not his popular fame today is justified. Although his contraction of ALS cannot be said to have been a fortunate event, things could have gotten much worse. Indeed, Hawking was a lucky man. It progressed slowly, giving him plenty of time to adapt. He found in Jane an intelligent and caring wife, in Dennis Sciama a stimulating doctoral supervisor and in Roger Penrose, an excellent colleague who taught him new mathematical methods for physics.[3] That, of course, is not to say Hawking was neither intelligent nor diligent.

From 1979 till 2009, Hawking was the Lucasian Professor of Mathematics at Cambridge University, a post that has been held by some of the world's leading mathematicians and physicists since the mid-17th century.[7] He was succeeded by string theorist Michael Green.[8][9] Their predecessors include Isaac Newton and Paul Dirac.

From the 1990s until 2018, Hawking maintained his obsession with formulating a complete quantum theory of gravity and with quantum cosmology.[4] He found the sum-over-histories (or path-integral) approach to quantum mechanics of Richard Feynman to be quite useful.[3] Recently, he returned to the scene with some progress made with a few colleagues on the solution to the black hole information paradox. For many years, it has been thought that the information of the objects have fallen into the black hole can never come back out. His new findings seem to suggest otherwise.[10]

While still studying for his PhD, Hawking was diagnosed with amyotrophic lateral sclerosis

, also known as motor neuron disease or Lou Gehrig's Disease.[11] This rare degenerative disease progresses rather slowly, punctuated by periods of stability. His doctors initially thought he had just two years to live.[2] After a pneumonia attack, he was rendered unable to speak and famously conducted conversations from his motorised wheelchair that has gadgets such as a punch glove and the ability to transform into a helicopter using a speech synthesiser, using only his cheek to operate the predictive text machine, and sometimes taking many minutes to answer questions. Although he was British, he spoke using a synthesiser with an American accent. He initially wanted an upgrade to a British accent (which the manufacturers would have made for him), but the technology was slow to advance to that stage, and preferred his American one, having not heard anything he liked better, and being identified virtually worldwide with the voice the synthesiser provided him for years. He died in March 2018 at the age of 76, 53 years longer than he was expected to live.[12] Unfortunately, his death was celebrated by the Andersonite movement, most particularly by YouTuber Ben the Baptist [13].

Views on religion, pseudoscience and mysticism[edit]

When he was in school, Hawking and some close friends had some interest in extra-sensory perception (ESP), but quickly became disillusioned after attending a lecture in which a scientist demonstrated how faulty ESP claims actually are.[2] While a number of pseudo-intellectuals try to make connections between mysticism and modern science — say between Eastern religion and quantum mechanics — Hawking showed nothing but disdain for the whole scheme. If you talked to him about that kind of trash in person, you would risk getting your toes crushed![2] Hawking said:[2]

In other words, if you guess often enough, you will eventually stumble upon something that appears to resemble the truth as we know it. That of course does not mean you are right. Perhaps predictably, his cosmological research put a strain on his marriage to Jane, a devout Christian.[2] Hawking has also become a favourite target of quote mining by creationists[14] because of his tendency to use the word God in his writings as well as numerous references to "the Creator" with respect to his writings on the Big Bang. This is, of course, open to interpretation: that this is a reference to a theistic deity, or it is intended to be a metaphor representing the natural laws of the Universe (i.e., Spinoza's God). His question about whether the Creator had any choice in when to create the universe and his assurances that information cannot pass through the singularity of the Big Bang are indicative of deism.

Hawking is therefore often used by creationists as an example of a believing scientist. This is the logical fallacy known as an argument from authority (i.e., "If an intelligent person such as Stephen Hawking believes in God, it must be true"). Essentially, quoting Hawking — rightly or wrongly — as a believer proves nothing. Whatever the truth of his beliefs, Hawking had often been quiet, or at least non-explicit, about religious and philosophical beliefs and doesn't usually voice them openly unlike others such as Richard Dawkins or Michael Behe. After his retirement from Cambridge, however, he did become more explicitly opposed to design in interviews and print. With the release of a new book entitled The Grand Design in 2010, Hawking downplayed the necessity of a creator, citing the increasing discoveries of exoplanets as evidence against the idea of design.[15] In a 2010 interview with Diane Sawyer, Hawking more firmly established his views on a separation of science and religion stating that:[16]

His comments on people inventing a personal god and interaction, as well as stating about defining the laws of physics as God, seemed to indicate a stronger belief toward Spinoza's God.

Hawking openly declared his atheism in an interview with the Spanish newspaper El Mundo in 2014.[17]

Like his parents, Stephen Hawking was generally sympathetic to the political left and regretted not being able to run over Margaret Thatcher with his wheelchair.[2] He became known as a supporter of the BDS (Boycott, Divestment and Sanctions) movement in 2013 when, at the request of Palestinian academics, he boycotted the Israeli President's Conference.[18] Presidential Conference chairman Israel Maimon expressed outrage as did many other Israelis.[19]

Hawking was convinced humanity would eventually go beyond the bounds of both our original planet (space colonization)[20] and bodies (mind uploading),[21] assuming we don't first destroy ourselves, and believes we must establish permanent self-sustaining offworld colonies within the millennium so as to prevent such extinction and foster the survival of life through deep time, even beyond the end of life on Earth.

In animated form, Hawking made guest appearances on The Simpsons, Dilbert, Futurama, and Family Guy, surely the high point of any career. In person, he has appeared on The Big Bang Theory and on Star Trek: The Next Generation, making him the only individual to appear on the show as himself, and also makes an appearance in a popular YouTube tribute to Carl Sagan.[22] His name, likeness and voice have also been used in tribute by science rapper MC Hawking, whom the real Hawking was quite amused by, likening it to old school satire show Spitting Image.[23] He even did a British insurance comparison website advert.[24]

To show how many balls Hawking had, he went to the Tiger Tiger nightclub in 2007 after it was targeted by terrorists.[25] He also used his vast fortune to gamble with pornography.[26]