As you can see, it's as big as this bus.

The Placoderms ("plate skin") are a class of extinct jawed vertebrates which are - by those few laypeople who've heard of them - dismissed as being a bunch of sluggish has-beens which were somehow easily outcompeted by primitive sharks and primitive bony fish. That is, except when people talk about the "first vertebrate superpredator," the bus-sized Dunkleosteus, which is popularly imagined as being akin to a swimming dumptruck of death that munched on primitive sharks like fishy carrot sticks. They are also known as "Panzer fish" in most German-speaking countries, but only a very few had body patterns that included the Iron Cross. 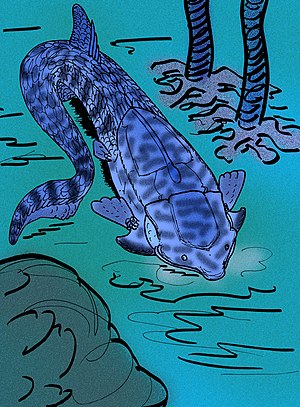 Reconstruction of Silurolepis platydorsalis (not as big as a bus, but you do get two at once)

The placoderms first arose in marine environments sometime during the Silurian period, but left very few fossils from that time. As was mentioned above, the ancestors of the first placoderms are thought to be an armored jawless fish related to the Osteostracans and the Galeaspids. Only two Silurian placoderms have been named, one being the mysterious "Wangolepis," which is known from a few fossil fragments, and the early antiarch, Silurolepis platydorsalis, from the Ludlow epoch of Yunnan, China. Although Silurolepis is the only officially/formally described Silurian placoderm, what little evidence we have is still enough to demonstrate that, by the start of the late Silurian, the placoderms had already begun diversifying into most of the known orders, including antiarchs and the arthrodires.

Come the start of the Devonian, the placoderms were, more or less, in all known marine environments, and would go on to colonize many freshwater environments by the Middle Devonian. The placoderms' domination of virtually all aquatic environments would last until the very end of the Devonian. Insultingly, human authors of "popular" books on prehistoric life tend to ignore, gloss over, or dismiss this fact in favor of focusing on the evolution of tetrapods. This is akin to writing a book on the modern history of Nevada, and devoting only a three-sentence paragraph about the influence of the gambling industry on the shaping of Las Vegas.