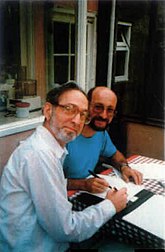 Ravetz and Funtowicz in 1988

Post-normal science is a concept developed by Jerome Ravetz and Silvio Funtowicz in the 1990s to describe certain fields in which high-cost decisions must be made but there is a good deal of uncertainty with relation to the relevant scientific facts. The phrase "post-normal science" is a spin-off of Thomas Kuhn's concept of "normal science".[1] Ravetz and Funtowicz have mostly applied this concept to ecological economics and to public-health policy. One of the key components of post-normal science is that it is not value-free, but used in the service of an outcome decided by value judgments (which makes it in some ways similar to decision theory).

Because of this, Ravetz and Funtowicz argue for a "democratization" of scientific knowledge through an "extended peer community" to integrate "local knowledge, values, and interests".[2] The authors feel that these perspectives and "other forms of knowing" have been unfairly excluded from science despite the fact that they're, well, not really scientific, so they'd like to abolish the underlying method and the discrimination between fact and fancy that it entails. The resulting hollowed-out shell would then be stuffed with nonsense, to be legitimized by keeping the description "science" as a mark of "quality". Perhaps they should cut out the middleman and simply call it "post-science"...

The concept has gained some currency in popular discourse recently. Due to its similarities to postmodern critiques of science, it has also been latched onto by cranks attempting to give their ideas a veneer of legitimacy much in the same way that postmodern rhetoric has.

Its most common usage is probably in the arena of global warming, where the term is sometimes bandied about by denialists.[3] It's also been picked up by some creationists.[4] This is especially ironic considering that postmodernism is often a bogeyman for right-wingnuts as well as the fact that post-normal science was coined by leftist academics and discussions revolving around it often read like watered-down Paul Feyerabend or Bruno Latour.