Other ways of knowing 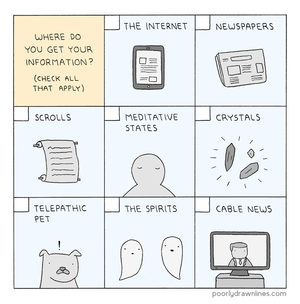 "Other ways of knowing" are alleged methods of obtaining information by various "alternative" (or non-scientific/non-rational/non-logical) means. Mainly, these exist as an extension of the "non-overlapping magisteria" concept that separates the scientific and physical from the religious or spiritual and as such, allow practitioners of pseudoscience to get away with practically anything.

When these methods work, they are usually subject to confirmation bias and selective reporting, and when they don't work the excuse is that the "powers are blocked."

Culture as an other way of knowing[edit]

The non-specious version claims that literature and art function as effective tools in teaching humans to be humans. Even a mostly-clear thinker like Christopher Hitchens was a huge advocate of the value of good fiction for humans to understand how other humans think. Or, as J. G. Ballard put it:[2] "Fiction is a branch of neurology." Stories are a hugely effective way of communicating ideas to humans, to the point that narrative bias is a major cognitive bias.[citation needed]

Similar to this is the concept of epistemic humility as applied to postcolonial theory and critical theory, in that non-Western forms of epistemology are frequently dismissed out of hand without properly evaluating their claims or have assumptions made about them based on shaky pretenses backed mostly by societal bias. [3]

The error to watch for in this usage of the term is changing the meaning of "knowing" mid-argument:[4]

Other other ways of knowing[edit]

They include, but are not limited to:

When it appears to "work"[edit]

More-or-less by definition other ways of knowing cannot be falsified, and cannot be independently replicated, and as such are not scientific.

This, in turn, does not mean that information garnered by these methods is always incorrect, just that it shouldn't be trusted on its own. Mind reading, for example, can be classed as an "other way" but may be quite correct with the information it generates due to a person's good instinct or a method such as cold reading (or at least when it is corroborated by more reliable sources).

Rationalists are advised not to try these at home without proper supervision.