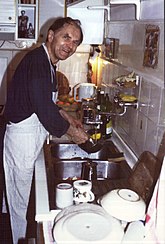 Doing something useful for a change

Paul Feyerabend (1924-1994) was a philosopher of science born in Austria who lived in Europe and America at various points in his life. During his time in the academy, he became known as 'the worst enemy of science'. A controversial figure, his writing has some of the charm, insights and snark of Nietzsche. He also defended pseudoscience and gave questionable readings of the history of science."[1]

Feyerabend was an early follower of Karl Popper, but later turned against Popper's ideas. He eventually rejected Popper's principle of falsifiability because every theory in practice encounters data that it cannot explain or that would falsify it. Thus, according to Feyerabend, Popper's prescriptive view would, if actually adopted, destroy science altogether and leave it with no replacement.[2]

Feyerabend was most known for advancing the concept of "epistemological anarchism", which is basically fancy-talk for "anything goes", as he put it.[3] In Feyerabend's conception, the demarcation problem cannot be solved through a reading of the history of science, because scientists have at various times employed non-scientific techniques in their methodology. Therefore, there can be no separation between science and pseudoscience and no prescriptive boundaries set on what scientific methodology ought to be. This position is most famously explicated in his 1975 book Against Method.[4] The accuracy of his reading of historical case studies such as the Galileo affair have been disputed, though.[5]

Feyerabend has been interpreted as a defender of science.[1][6] On this account, Feyerabend's defense of pseudoscience is a strategic criticism of attitudes of scientists, which lead them to argue from their authority as scientists rather than on the basis of empirical evidence when engaging pseudoscience. In one account of his defense of astrology, Feyerabend stated "astrology is an excellent example of the way scientists deal with phenomena outside their area of competence. They don't study them, they simply curse them, insinuating that their curses are based on strong and straightforward arguments".[6] The claim is thus not that astrology is as good as astronomy, empirically, but that scientists have failed to engage the ideas in the proper way, which Feyerabend apparently saw as contributing to false and uncharitable views of science itself among the general public.[1] However, his often over the top defenses of pseudoscience make it questionable whether he handled his criticisms responsibly; pseudoscience promoters have latched on to Feyerabend's works to falsely claim that their ideas have equal claim to empirical truth as scientific results. Additionally, Feyerabend claimed that traditional Chinese medicine was sometimes more effective than evidence-based medicine,[6] apparently from personal experience.

Feyerabend argued for a democratization of science, allowing for pseudosciences such as astrology or creationism to lay claim to truth (it must be said that he wasn't a creationist, he just defended creationism to annoy the piss out of scientists). Needless to say, Feyerabend is the favorite philosopher of more high-level pseudoscientists and woo-meisters, especially due to his use of alternative medicine.[7]

Feyerabend put forth some of the earliest arguments for eliminative materialism, a position in philosophy of mind that the mind is fully reducible to the brain.[8]