The structure of a prokaryote is very much simpler than that of a eukaryote. There are no endomembranes, endosymbionts, nucleus or cytoskeleton. The DNA is carried on the genophore, a circular chromosome, in an ill defined area of the cytosol called the nucleoid. The chromosome is attached to the cell membrane during cell division (fission), frequently at a point called the mesosome. The name comes from πρό-καρυον (pro-karyon) - before kernel (which refers to the nucleus). 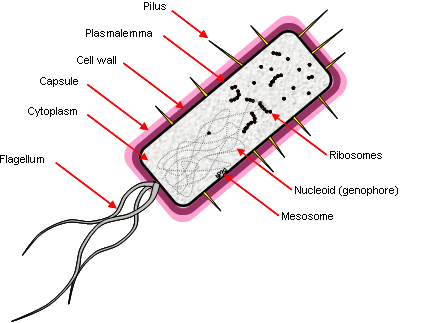 The cytosol contains oil droplets, food reserves and the 70S ribosomes, and is surrounded by a plasmalemma. In Gram negative bacteria, a further outer membrane surrounds the plasmalemma, with a thin cell wall and periplasmic space trapped between them. In Gram positive bacteria, there is no outer membrane, and the cell wall is thicker. The cell wall is composed of peptidoglycan and various organic acids in Eubacteria. Bacteria have flagella, but they are simple proteinaceous strands attached to a rotary motor, completely dissimilar to the complex eukaryotic undulipodium. Membranes may be present in the cell, as in the thylakoids of the Cyanobacteria. The cytosol may also contain various episomes (small circular chromosomes), some called plasmids, and others called (bacterio)phages, which are bacterial viruses.

Prokaryotic DNA lacks histones (packaging proteins), although other packaging proteins are present, and molecules have easier access to DNA compared with eukaryotes. They generally have efficient genomes, with little sequence other than coding sequence or regulatory sequence. Transcription is by just one class of RNA polymerase. Transcription leads to translation with no intermediate processing, which allows several genes to be encoded in a single transcriptional unit (a polycistron). They have small (70S) ribosomes.

Prokaryotes are extraordinarily diverse and account for a very large proportion of the biomass on earth. Some important groups are: