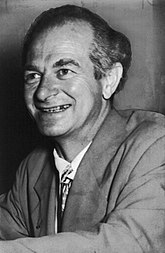 Linus Pauling (1901–1994) was an American chemist famous for his work on quantum chemistry and the structures of biological molecules, before his unfortunate late turn to pseudoscience.

Pauling brought home with him the first-hand insights into the new quantum theory and X-ray crystallography from Europe, and produced first-rate and seminal work on the quantum mechanics of chemical bonds, which is summarized in his book The Nature of the Chemical Bond.[1] This is considered the founding treatise of quantum chemistry. He also co-wrote an influential text titled Introduction to Quantum Mechanics.[2] These texts remain valuable today.[3]

From the mid-1930s, Pauling shifted his attention to the study of biochemistry. He identified the difference between hemoglobin in normal individuals and in those suffering from sickle-cell anemia using X-ray crystallography. In the 1950s, he argued that DNA had a triple helix structure as opposed to Watson and Crick's double-helix model, but then revised his position after he got access to Watson and Crick's higher quality X-ray diffraction photographs. Pauling came close to beating the duo in making the discovery.[3]

In a rather strange turn of events, Pauling in his later days became convinced that massive doses of vitamin C could protect against not only the common cold but also various other illnesses. He was sufficiently convinced to even set up a research institute, the Linus Pauling Institute,

promoting his non-mainstream line of research. Pauling had not conducted any of his own original research, and instead reviewed the scientific literature.[4]:80 This is not a bad thing in and of itself, but shortly after Pauling started promoting these ideas, he was censured by the very scientists that he was citing, who claimed that he misrepresented their work.[4]:80 This remains one of the most spectacular examples of Dunning-Kruger effect/Nobel disease. Pauling's unconventional medical views have never been accepted by mainstream scientists.[3]

As the 1950s developed, Pauling dedicated more and more of his time on this crankery and political activism, and did little further scientific research.[3]

In the aftermath of World War Two, Pauling and his wife became pacifists, joining the Emergency Committee of Atomic Scientists.

His political activism resulted in the State Department denying him a passport until Senator Wayne Morse denounced the action publicly.

and the Mainau Declaration.

He was one of the leading advocates for a nuclear test ban treaty among the nuclear powers, the USA, the Soviet Union, and Great Britain. Such a treaty was entered into force on October 10, 1963. On the same day, the Norwegian Nobel Committee announced that Linus Pauling had won the Peace Prize that had been held over from 1962.[5]

All this meant that he was a perfect target for red baiting. He was ordered to appear before the Senate Internal Security Subcommittee where he was accused of being "the number one scientific name in virtually every major activity of the Communist peace offensive in this country"[6]

The National Review accused Pauling of being a fellow traveller of proponents of Soviet-style communism. Pauling sued the magazine for $1 million but lost the case in court.[7][8]

His left-wing sympathies and his anti-nuclear activism did little to endear him with his colleagues. He was practically ostracized by the Chemistry Division of Caltech until 1991, when they threw him a party for his ninetieth birthday.[3]