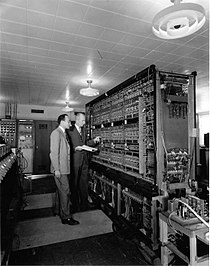 The great-granddaddy of the thing you're using now.

A computer is a device capable of automating vast amounts of mathematical computation to solve all kinds of problems, both mathematical and non-mathematical. While early digital computers from the 1930s and 1940s generally were used for numerical computations such as data encryption/decryption and weather simulations, over the next sixty or so years computer technology (helped along by the invention of the transistor at Bell Labs) would advance to the point where computers could be used to enhance or enable activities such as text processing, games, and pr0n. Today's computer is often small enough to fit in a small space on someone's desk (or even in their pocket, in the form of a PDA or a smartphone), and is capable of downloading and viewing a whole lot of porn useful information in a very short time.

A very small computer optimized for interactive use is called a calculator, and is a great way to give a math educator fits trying to figure out what to do with it.

The earliest known analog computer, the Antikythera mechanism, dates to between 150 and 100 BCE, and was found in a shipwreck in 1901. Following its re-discovery, its function was not fully understood until around 2006. The device was a sophisticated — though somewhat lacking in engineering precision — astronomical and calendrical calculator.[2] People have used many types of navigational and astronomical analog computers since that time, including the planisphere and the astrolabe. One of the first purely mathematical calculators was the slide rule, which was invented in the 1600s, following the publication of the concept of the logarithm upon which it relies.

The digital computer era began in 1936 with a theoretical paper by Alan Turing, On Computable Numbers. World War II (1939-1945) hastened the development of digital computers, with Konrad Zuse building the first modern computer in 1941. Digital computers' utility, speed and eventual cheapness have largely made analog computers redundant in all but limited, specialized uses.

A computer can be seen as a set of layers that progressively abstract the complexity of the underlying ones:

The idea of quantum computers is basically that, once things get small enough, physics go out the window, meaning that there IS a physical limit to how small silicon transistors get before everything becomes chaos (about 7 nm). Though they are working on making transistors out of different materials, which would allow them to get smaller, it still means that at one point or another it will become physically impossible for Moore's Law to continue, meaning that the growth of computing power will stop, inhibiting scientific progress and causing a global recession due to the computer industry shrinking dramatically. However, a quantum computer would take advantage of the laws of physics going out the window at this size to produce far more powerful computers. This has been claimed possible by D-Wave Systems, which claimed to have created two models, but as yet has not demonstrated a quantum speed increase through independent tests.[4] Quantum supremacy is the point at which a quantum computer can be demonstrated to faster than a "classical" (or non-quantum) computer for any particular problem. It is expected that a quantum computer will reach quantum supremacy once it reaches the size of 45 qubits (or quantum bits).[5]

Quantum computing is not expected to enter the PC market in the foreseeable future due to the bulk of cooling and vacuum systems needed for superconductivity. They also would be prohibitively expensive (and no quantum PCs exist yet), and wouldn't really help anything until Moore's Law ends. However, supercomputers and servers will be drastically improved by them, able to do calculations that take a classical supercomputer far longer, and drastically increasing server speed for the same reason.