From RationalWiki
(Redirected from California)
Jump to: navigation, search
California

Whereas Florida is the wang of the United States, California represents the ass of the continent. But it's America's ass!

Since a portion of its territory is on the "wrong" side of the San Andreas Fault and lies on the Pacific plate, California isn't very American.

Most of California was settled by Hispanic peoples long before the fabled East Coast settlements of Plymouth and Jamestown.

It had legalized gay marriage for a few months in 2008 until the infamous Proposition 8 struck this down; however, Jerry Brown, of "California Über Alles" fame, is right on the job, and he figures that any gay couples who did get married during that time are still married.

In August 2010, Proposition 8 was declared unconstitutional by a federal judge, but the decision was stayed pending appeals to the United States Court of Appeals for the Ninth Circuit, where it was struck down again, then stayed again pending appeal to the Supreme Court. The justices in their wisdom ruled that the backers of Prop 8 did not have legal standing, and on June 28, 2013 same-sex marriages resumed, and it's been ffabulouss.

It is the most populous state in the U.S., having a population greater than that of Oregon, Washington, Nevada, Arizona, Utah, Idaho, Montana, Wyoming, Colorado, New Mexico, Alaska, and Hawaii combined (about 39,368,078 vs. about 39,337,487), but it only gets two Senators compared to the 24 that those other states get.

The four California seasons are Drought, Fire, Quake, and Flood. These represent the classic elements Air, Fire, Earth, and Water respectively, proving all the New Age healers in California right [citation NOT needed].

This used to be a river.

It never almost never rains in southern California. It's really not that bad though the state hasn't had a real winter in years. This causes confusion among people who are not from California and a lot of trash talk about how their state is better because it has "real seasons". To a Californian, though, it just sounds like something akin to penis envy. In recent years it hasn't rained in like, at all. Which would be totally awesome if it were not for like crops and stuff that wither and die if they don't get their like, H2O, I mean water, you know?

The water wars in California's central and southern valley are making headlines. It's mostly farming interests who want to rape California's groundwater—with long-term damages that will affect the surrounding regions for thousands of years—for their own profit while claiming the feds are overstepping their boundaries by preventing that from happening.[2] Along Highway 99 between Modesto and Bakersfield you can see what non-farmers like to refer to as "water whining" signs claiming that Congress has somehow caused California's drought, and asking "Is growing food wasting water?" (I didn't know you could eat cotton, which is grown heavily in some of these regions). Most farmers are converting anything they can to Almonds due to global demand.[3] Almonds are so profitable these days that even housing developers are planting them rather than building houses. It's a gold rush.[4]

Given the circumstances, it looks like changes to agriculture will be slow and painful, so they're focusing on residential water use which people can actually change. Agriculture is a golden goose. They can't kill it. Golf courses, water parks, lawns, fountains, are easier targets. It's pissing in the wind, but that's the reality: residential users will actually conserve if you ask them to. Ask farmers to use less and they cry like babies and refuse to change. Restrict their access to surface water and they just pump more from underground, causing the valley floor to further subside. 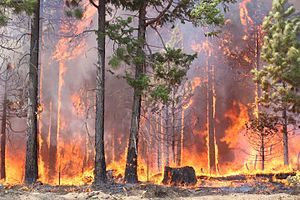 California forests in their natural state.

Hot, dry summers create tinderbox conditions in woodland areas where, despite dire official warnings every Fall, someone invariably drops a cigarette or a match, touching off a "wildfire season" that lasts roughly from late August through October. Powerful hot "Santa Ana winds" blow in from the East and create unusually hot days during fall whose temperatures exceed some warm days in July. No, these winds aren't hot from the desert, but from being compressed by the mountain's geography. During these windstorms, sustained wind speeds of more than 60 mph (96 km/h) are common in the mountain passes. When this happens, any spark can quickly grow into a massive, seemingly unstoppable wildfire. TV news promptly goes into DRAMA mode: intrepid reporters in station-monogrammed fleece jackets file breathless LIVE reports from "the fire ground" while helicopter aerial shots reveal huge walls of flame approaching suburban communities as homeowners desperately water their roofs with pitifully dribbling garden hoses. Thanks a lot, PG&E.

Ignoring statistics and geology, many natives swear that periods of cooler temperatures typically found between November and March bring on "earthquake weather". During this period, stores often promote quake safety items such as straps made of nylon web that anchor tall bookcases and other furniture to walls and "childproof" kitchen cabinet latches that prevent dishware from being hurled to the floor. Also popular are backpacks stocked with first aid kits, flashlights, water, and freeze dried food. See also earthquake prediction and survivalism. In the Bay Area and Los Angeles, Rain (snow in the higher elevations and latitudes) is usually supposed to start happening at late October, but there are some years where there's barely rain at all, with even smack in the middle of December seeing a day or two of showers and the rest of the money being bright, sunny, but cool (still warm enough to wear a T-shirt outside in some days).

It's not actually Spring, but more like January when flooding generally occurs, usually as a result of excessive rainfall due to subtropical storms, excessive snow melt, excessive runoff, or levee failure. In addition to homes and roads suddenly underwater, there are massive landslides to contend with. In LA, several people either drown or are rescued from the Los Angeles River after straying too close to its concrete-lined channels.

Customs (The Grapes of Wrath)[edit]

California is the only lower 48 U.S. state that stops you at the state line to ask whether you have any produce. (Hawaii does the same.) They have enough fruits and nuts already and don't want any more.[citation NOT needed] This practice started during the Great Depression, when going through California customs was to keep out Okies and Arkies fleeing the dust bowl, but the ACLU sued and California wound up with a bunch of Okies and Arkies anyway. They had to settle on keeping fruits and nuts out of the state, but they wound up with a bunch of fruits and nuts anyway.

When people say nobody walks in California, they usually mean Los Angeles, which is a special case when it comes to pedestrian traffic (and a lot of other things). It's rare to see a skater, jogger, or a bicyclist on the street in LA since everybody knows that public parks and beaches are the only place you should do such things (and always when dressed in fashionable lycra "activewear" bearing a Nike or Reebok logo). Even more rare is seeing a pedestrian outside of a crosswalk since it's common practice for police to stop and question anyone seen walking more than two blocks, especially in an upscale neighborhood. (The exceptions are Compton, LAX, and the areas around them, surprisingly.) That being said, Northern California (which in many regards is so different, it could be its own state) does actually contain insane people who walk more than two blocks and are neither too poor for a car nor out to steal one. Crazy, isn't it?

LIBERALS RAN CALIFORNIA INTO THE GROUND!

Like, what in the hell is a subway? Like an underground car? Wait--are you talking about the restaurant?

Up here in the SF Bay Area we have the loudest, and filthiest subway in the whole country, and quite possibly the world the Bay Area Rapid Transit or BART for short. Many of us wish it had been called the Fremont Area Rapid Transit District, but it's too late now to change the name. The first thing you'll notice when riding BART is the extreme noise that the incoming train produces. One could be forgiven if they believed there was a tornado inside the station. Also unlike N.Y people are allowed to set up stands and shops inside the stations. With the Downtown Berkeley station having a few small coffee shops inside it. Also of note are the many stands run by Jehovah's Witnesses, especially on Fruitvale Station who take pride in distributing magazines like Awake! to the heathen masses. If they try to bother you, just say you're Shinto and they'll leave you alone, this is Oakland after all.

Sacramento has a robust light rail system that serves the city well, though it's entirely above-ground. It efficiently funnels commuters to and from work, substantially reducing traffic during rush hour. The clientele can become rather sketchy outside of commute hours though.

California, being less religious than the rest of the U.S.[5], is a heathen state. They will not go to hell because the devil's afraid of what a bad influence all the Hollywood execs would be on the murderers! Its Bay Area is a fiery pit of atheism and homosexuality!