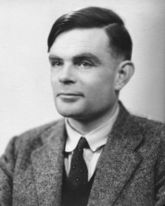 Alan Turing (23 June 1912–7 June 1954) was a [note 1] British mathematician, academic and a key figure in the Bletchley Park SIGINT operation during World War II (1939-1945), particularly for his work in breaking the Enigma code. He was a marathon runner of near-Olympic standard. He was (as it happens) gay, and a victim of state-sanctioned homophobia under a British law which criminalised homosexuality.

In 1952 Turing chose chemical castration as an alternative to prison after conviction for homosexual offences.[note 2] He died in 1954, after (as many think) choosing the Snow White route by eating an apple spiked with cyanide,[note 3] and therefore never lived to see the eventual revelation of his pivotal role in the Allied war effort, not to mention his lionization as the alpha hacker of all alpha hackers.[note 4][note 5]

It seems unlikely that the conviction as a common criminal of one of the most significant figures in World War II[note 6] had any influence on the liberalisation of British law on homosexuality in 1968: the Wolfenden Report

of 1957 does not mention his case, and his wartime activity remained secret at that time.

In 2013 a royal pardon reversed his conviction - a belated apology for the injustices he had suffered.

Turing is regarded as one of the fathers of computer science for his co-development, with Alonzo Church, of the Church-Turing thesis, which hypothesized that any problem that is "effectively computable" (that is, solvable by mechanical means) can be solved using a certain sort of formally specified machine, which is now called a Turing machine.

He also devised a "universal Turing machine" that could "compute any function that any Turing machine can compute," which was a "blueprint" for the later general-purpose computers. According to the Stanford Encyclopedia of Philosophy, many philosophers of science, being unacquainted with the finer points of the theory, have grossly misinterpreted the thesis, falsely stating that it proves Turing machines to be capable of computing all that is computable, or that any possible computer architecture is no more powerful than the Turing machine.[2]

The Turing Test is a well known method for ascertaining computer "intelligence." It consists of a person (judge) communicating with two subjects, one of which is human and the other a computer. If the judge is unable to distinguish between human and machine then the computer is said to display intelligence. The communication is nowadays via typed words on a screen in order to remove other sensory clues. Turing originally conceived the idea from a variant of a sex detection parlour game and envisaged teletype as the communication medium. The Chinese room thought experiment attempts to refute the Turing test's standard for judging artificial intelligence.

A fundamental issue with the test is that it aims to trick human judgment, so that human judgment with all of its imperfections is the basis for passing the test. This means that trickery analogous to that of a stage magician can be all which is needed for a computer to pass as "intelligent". Such trickery could even matter more than actual intelligence on the part of the computer – and conversely, a genuinely intelligent computer with poor human-communication or acting skills would fail the test.

The original formulation of the test was known as "The Imitation Game", where person A attempted to impersonate person B. It was then up to the interviewer (Person C, if you will) to decide who was telling the truth and who was lying. Possibly due to Turing's interest in the nature of gender, he usually described A and B as a man and woman couple, with one pretending to be the other gender. The interviewer could ask questions and A and B, who were isolated from the interviewer so that even their voices wouldn't be heard, would then answer. The basis of the imitation game with regards to the development of the Turing Test was the question of what would happen when one of these individuals, A or B, was replaced by a machine (a computer, in our more modern views on how the test can be carried out). Unfortunately, this was a bit too much of a gender-bender for people's squeamish sensibilities, and almost every subsequent version of the test conducted left this part out, leaving it as just an interviewer and a simulated interviewee.[note 7]

Extra points can be earned by either computer or human if they are able to convince the judge that he/she (the judge) is a computer.[note 8]Do You Believe That?

If you asked any human: "What is 3690723?", the answer would be "I don't know". Therefore, any machine that could instantly answer questions which only a computer could instantly answer would reveal itself as nonhuman by answering the question, which could allow itself to be discriminated against. A computer which wished to pass the Turing test would have to feign ignorance, in other words, to try to pretend to be inferior to its true self. This means that pretending to be ignorant is a sign of intelligence, and that a machine which picks which question it should avoid answering is smarter than a machine that does not.

Turing was later convicted of having a sexual relationship with another man in 1952 and was given a choice between jail time and chemical castration through the hormone estrogen, and chose the latter.[3][note 9] His security clearance was revoked, leaving him unable to continue his work in cryptanalysis. He died two years later of cyanide poisoning, which was ruled to have been a suicide after an investigation, though his mother thought the death might have been accidental. A half eaten apple was found near him, and is speculated to be the means with which he ingested the cyanide, though the apple itself was never tested.[4]

In 2009, the British government apologized for thus driving one of the most brilliant scientists of the 20th century to his death.

In December 2013, Turing was finally issued a posthumous Royal pardon.[5][6] As to the hundreds of other gay men? Not a word.

Criticisms against the legislation[note 10] ranged from poor education of law ("Oh, you're rewriting history!"), ad hominem ("This is why I can't take left-wing arguments seriously!") to outright homophobia ("There were rumours that Turing was a child molester!"[note 11]). Other, more sensible criticism has been raised by Glyn Hughes – sculptor of the Alan Turing Memorial in Manchester – who said he was "not entirely comfortable" that Turing had been pardoned while thousands of other gay men had not, saying that: "The problem is, of course, if there was a general pardon for men who had been prosecuted for homosexuality, many of them are still alive and they could get compensation."[6]

The Policing and Crime Act 2017 was given royal assent on 31 January 2017. This act implements, among other things, the 'Alan Turing Law' which gives an automatic pardon to men convicted for homosexual acts that are no longer considered illegal today.

The 2014 movie about Turing's life, starring Benedict "One Computer Nerd Wasn't Enough For Me" Cumberbatch, was nominated for four Oscars (including Best Pic) and won one, for writer Graham Moore. It was called The Imitation Game (see above). Suffice to say, its multiple gross inaccuracies would not fool a judge.

There is an urban legend to the effect that Apple Inc.'s bitten-apple logo is a homage to Alan Turing's manner of death. This lovely story is sadly untrue, although still very prevalent.[note 12][7][note 13]