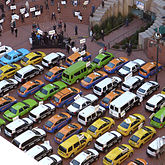 Uber is a controversial taxi company "ride-sharing" company (but definitely-not a taxi company) — though rides are not actually shared — which works through a phone app and is best known for its rapid growth and the severe backlash to its spread, particularly its opposition from traditional yellow-car taxis.[2]

Uber currently does business in 57 countries, and has been heavily criticized for its performance and business tactics.[3] In many jurisdictions, taxicabs have been highly regulated and licensed, supposedly to protect public health and safety. In some areas, the licenses command very high prices.[4] The licenses create an oligopoly market, exclude competition, and raise prices, which gives the license holders a comfortable and reliable living. By contrast, Uber doesn't require its drivers to have taxi licenses like other normal taxi drivers because they totally aren't taxi drivers and instead, as Uber claims, are a "ride sharing service."

Uber's business was built on stealing copying technical innovations from Lyft, its competitor, while shrewdly observing that every Lyft trip is "a criminal misdemeanor" due to the commercial licenses and commercial insurance.[5] The observation by Kalanick that everything Uber did was illegal made it difficult for their lawyers to advise which illegal acts were OK and which were not.[5] For example, Uber's Chief Legal Officer Salle Yoo approved Uber's "Greyball software (which concealed the company’s practices from government investigators) and even reportedly participated in the hiring of a private investigator to interview friends and colleagues of litigation adversaries."[5][6][7] Harvard Business School Professor Benjamin Edelman has concluded that Uber's business model is basically criminal and should be punished though existing laws and massive fines (up to hundreds of dollars per ride).[5]

Critics of Uber point out their drivers' lack of training in contrast to regular taxi drivers who do undergo training.[8] Furthermore, the drivers themselves have protested the way that they are treated by the company[8] because they are considered "independent contractors" so they are not protected by labor laws and must go to a company-chosen arbitrator at $3,500 a day plus a $2,500 retainer if they wish to have any labor issues resolved in court.[9] They must pay the fees of the court arbiter, the opposing counsel, and their own counsel even if they win.

Being an Uber driver tends to average out at $14 an hour, about half of what the average taxi driver makes, according to drivers,[10][11][12] while Uber contends that drivers make an average of $25 an hour with a median of $90,000 a year.[13] The fine print is that drivers must maintain their vehicle, pay appropriate vehicle taxes, gas, tolls, vehicle registration, and other employment taxes. To put that into context one would need to work 27 hours a day, 365 days a year, in order to make the median estimated Uber salary. Do note the fact that this is mathematically impossible.[14] A 2018 MIT study of Uber and Lyft drivers found that net profit for drivers was "very low", with a median profit of US$3.37/hour with 74% of drivers earning less than the minimum wage in the state in which they operated.[15] The study also found that drivers had a negative impact on taxation due to how the mileage deduction affects taxes in the US.[15]

Uber's interest in autonomous cars might be motivated by a desire to replace its current (underpaid, overworked, untrained and complaining) workforce.[16] If successfully implemented, this could have the effect of eliminating ten million jobs.[17]

On top of that, the woefully inadequate background checks for prospective drivers have resulted in numerous reported instances of Uber drivers assaulting, raping and even kidnapping passengers who hire rides from the service.[18] Other complaints have run the gamut from reports of drivers leaving the meters on long after their ride is complete without Uber taking any action, unexplained mystery fees that can more than double the agreed fare after the ride, "surge pricing" that can be up to $20 per mile traveled, and some drivers attempting to take advantage of riders paying in cash when drive totals somehow happen to be higher than the cash on hand.[19][20]

One notable incident happened in Los Angeles in 2014, where a woman was taken to an abandoned lot instead of her home and Uber only apologized for the "inefficient route"![21]

Another, more prominent, area of criticism for Uber has been their tendency to price gouge, particularly on holiday nights.[22] Known as 'surge pricing', this includes raising their rates by as much as 900% of the normal rate on various special days of the year.[23][24] This has tended to create backlash among consumers and consumer advocacy groups alike, as it tends to especially take advantage of vulnerable partygoers who may be too intoxicated to notice the price hike.[25]

Uber was the subject of an independent investigation into its corporate culture of sexual harassment, discrimination, and retaliation.[27] The investigation eventually led to the departure of founder and CEO Travis Kalanick, as well as other changes to Uber's organization.[28] Is it any surprise that such a man would support a President known for being abusive towards women?[29]

It was revealed that the Apple Uber app was given a special permission by Apple to screen capture phones using the Uber app.[31]