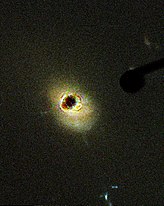 A quasi-stellar Radio Source (quasar) is a term used to describe the brightest and most distant objects in the known Universe, which emit up to a thousand times the energy of our own Milky Way galaxy.

Quasars have a very high red shift which indicates extreme distance and age. The most distant quasar ever discovered is a mind-boggling 12.9 billion light-years away and would have formed when the universe was approximately 770 million years old.[1]

The brightest (not the most luminous

) quasar is named 3C 273 and it's located at a distance of 2.5 billion light-years. It can be seen with amateur telescopes — as a star-like object — in the constellation of Virgo.

The properties and formation of quasars was historically controversial.

However, in recent times quasars are believed to be formed by the accretion of material into supermassive black holes.[3] Essentially, quasars are galaxies in the very early stage of their formation, where there's still enough infalling matter to feed that voracious black hole in its center. As the material swirls down the drain on its way to the event horizon, it heats up. A lot. The result is a hell of a lot of radiation across a wide variety of frequency bands.

When quasars were first discovered, nobody really knew what they were. In 1963, Nikolai Kardashev (of Kardashev Scale

fame) speculated that the newly discovered quasar CTA-102 might be a radio beacon developed by high-tech space aliens. The Byrds even wrote a song about it:

If quasars really are artificial radio beacons, they are an awfully large and inefficient way to generate radio signals.